Cody Coughlin Has a Perfect Night at Dixie Motor Speedway 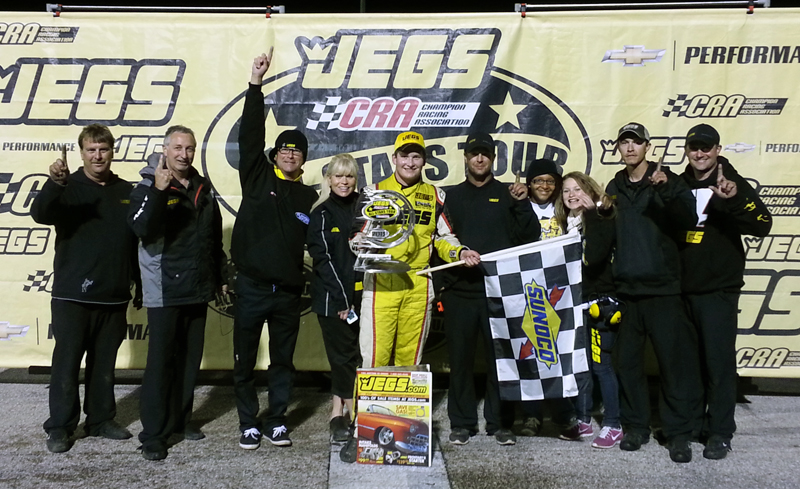 So far in 2013, 17-year-old Cody Coughlin has been crossing numerous achievements off his on-track to-do list.  Friday night, the Ohioan struck another big checkmark onto his resume with his first-ever JEGS/CRA All-Stars Tour win.

A season that saw his first-ever Late Model victory in February and all top-six finishes in various series since witnessed another highlight moment Friday.  Coughlin passed Mike Stacy with just seven laps remaining in the Dixie 100 presented by JEGS and held off the pack en route to his first JEGS/CRA All-Stars Tour series victory at Michigan’s Dixie Motor Speedway.

It was about as a perfect night a driver could have at a short track.  Not only did he win the main event, he also was the fast qualifier and left the track as the point leader in the JEGS/CRA All-Stars Tour.

“It is awesome,” Coughlin, the 2011 JEGS Tour Rookie of the Year, exclaimed after the race. “I fell back to third on the last restart and battled with Landon Cling for second. Once I got by him, I was able to chase down Mike Stacy and get the W.  I couldn’t have done it without the hard work and dedication from my crew and family.  This one means a lot to everyone associated with this Team JEGS No. 1 car.”

Most of all, JEGS was the presenting sponsor for the Dixie 100.

“I am so proud to bring home the JEGS trophy for our 350-plus employees at JEGS,” Coughlin exclaimed. “We could not have scripted a more perfect night than this.”

Coughlin made his first appearance at the top of the leaderboard after a daring three-wide pass under Jimmy Novak and Josh Nelms with 30 laps to go to take the lead. After he took the lead, Novak and Nelms got together to bring out a caution.

“It is hard to pass in a Crate (engine) Late Model, you need a lot of momentum,” Coughlin said. “I saw an opportunity going down the backstretch while Novak and Nelms were battling for the lead.  I drove it in there and came out of turn four with the lead.”

On the restart, Coughlin would fall back to third, but he dug in his heels and started to work his way back to the front.

“That restart was a little rough,” added Coughlin.  “That got me a little upset, but I just got focused to get back to the front.  I was so focused, I am not sure if my crew chief Nick Easton or my spotter Scott Wimmer was saying anything to me. I wanted to get the lead back.”

On lap 76, he would get by Landon Cling to take over second and begin to real down Mike Stacy for the lead.

With nine laps to go, Coughlin caught up to the back bumper of Stacy and two laps later he made the pass for the lead once again.  This time, he wasn’t looking back.

“I got up to Stacy’s bumper and I could see he pushing real bad. So I stuck my nose in there, gave him a little tap on the door to let him know I was there, got by him and drove away for the win.”

Coughlin proved he was the fastest car all day. Earlier, he won his first fast qualifier award with a time of 15.360 seconds (94.750 mph). He would draw a four for the invert and start on the outside of the second row.

“I have to thank the good Lord for everything,” Coughlin said. “I am very blessed to have him on my side, especially with the night we had.”

“We practiced with the goal of getting the car setup to race. So for us to get fast time was a bonus and we got a good starting spot for the race.”

Coughlin was also encouraged by the reception he and his team received from the fans.

“The fans were great and it was cool that they cheered for a Buckeye in Wolverine country. It was incredible to see many waving their yellow JEGS hats in the stands. It was awesome to celebrate it with my crew and my family. My dad was at the car and there was water flying everywhere. Plus, it was cool to see my biggest fan, my sister Kennedi, be the first one to greet me in victory lane. My mom, Di, was almost in tears.  We got our first fast time award, our first win and we are leaving here with the points lead.  Can’t ask for a better night.”

Coughlin and his Team JEGS race team hope to continue their top-ten streak on Friday, June 14 at Berlin Raceway in Marne, Michigan.