Cody Coughlin Has a Solid Run at Nashville 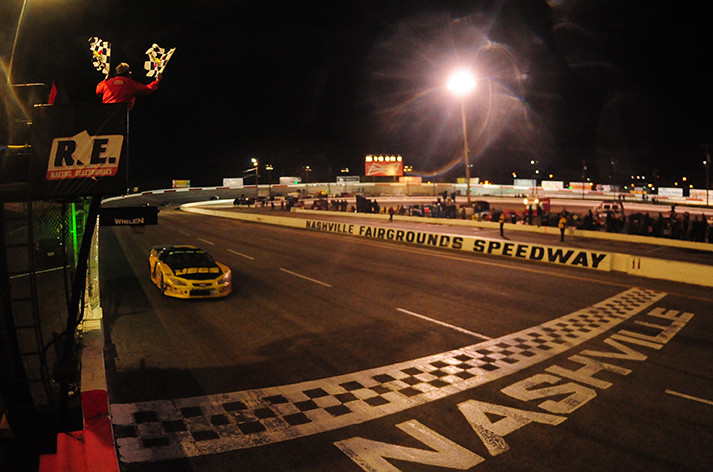 Cody Coughlin’s racing season is already memorable, as he and his Team JEGS crew have picked up three wins and the JEGS/CRA All-Stars Tour championship. This weekend, the team came to Fairgrounds Speedway Nashville to focus on their Super Late Model program heading into 2014.

Coughlin was part of a strong field of drivers that competed in the All American 400 at the historic oval. The track has given race teams fits over the years as they tried to figure out the five-eighths-mile oval.  Not about to give the track the upper hand, Team JEGS crew worked hard on Friday and Saturday practices to get a strong qualifying run that would qualify in the top 30 to automatically get a starting spot for the 300-lap event.

Coughlin went out and set the seventh fastest time for the event. This brought a huge smile to Coughlin and his crew after his run. Especially when they out-qualified some of the “big guns” in short track racing.

“Nick Easton, my crew chief, had an idea for a setup and we took a shot at it,” Coughlin said after the run. The car had more grip on the track than what I experienced all weekend. I am excited to be starting up near the front in my first run in this event.”

In the 300-lap feature, Coughlin raced hard with some of the top Super Late Model drivers in the country, eventually finishing a solid 13th.

“We all worked hard and found something in qualifying and it was cool to qualify up front for this event,” Coughlin said. “We ran decent most of the night. We were inside the top-10 quite a bit and fell back a little near the end. We just need to work on keeping it fast at the end to contend for the win.”

This is the second long-distance race that Coughlin and the Team JEGS crew have competed in the last month. In October, Coughlin raced in his first Winchester 400 where he finished seventh.  What they learned at Winchester and Nashville will help them with the goals they will set in 2014.

“Every time you race it is a learning process,” Cody Coughlin said after the race. “We have ran real well in our select Super Late Model races this year. We ran well at Anderson, Auto City and Winchester. We are capable of it and we just need to capitalize more on it with our good equipment and continue to make it better."

“I am very proud of our team and really appreciate their hard work and dedication,” Coughlin said. “We always go out with the mindset to win. We have great focus and we proved that this year with three wins and a championship.”

Many family and friends including his parents John and Di Coughlin joined Coughlin this weekend. He even got a visit from Scott Wimmer’s parents Ron and Joan, as well as Scott’s brother Chris and his wife Jana.

“I really appreciate the support from my family and friends. My parents always provide their love and support and help keep me motivated all year long and I especially want to thank my sister Kennedi for being my big cheerleader,” Coughlin said. “It was also great to visit with the Wimmer family, they have a great history of racing and are successful track owners of State Park Speedway in Wausau, Wisconsin.

“Also, praise God for this awesome year we have had so far. He has kept our whole team safe this year with our racing and traveling. We are a very blessed team.”