Cody Coughlin Has His Night on the Championship Stage 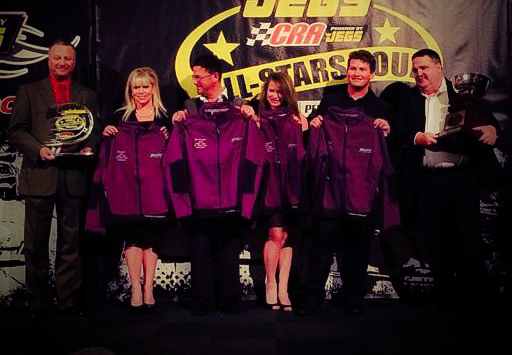 This past Saturday, Cody Coughlin and his Team JEGS crew celebrated their 2013 JEGS/CRA All-Stars Tour championship as Cody officially accepted his trophy at the Crowne Plaza Hotel Union State in Indianapolis, Indiana.

“I have to praise God for the blessings he bestowed upon all of us this past year,” Coughlin said. “Each of us came to the team with a unique talent and together, we were able to have this great success.”

To add to the ambiance of the championship, Coughlin enjoyed the location where the banquet was held to put an exclamation mark on his 2013 season.

“It was a cool place to celebrate our championship. It is an old train station with a really high ceiling,” Coughlin said about his big night. “It was a great opportunity to thank God and everyone from my immediate family, crew and sponsors. We achieved our big goal of the season and it was awesome to celebrate it.

"Also, it was cool to visit with many of our racing friends and competitors.  Short track racing provides not only great competition but long lasting friendships as well.”

One of the highlights of the evening was the presentation of championship jackets from Irish Saunders of Hoosier Racing Tires for each member of the Coughlin family.  John, Di, Cody and Kennedi now have matching purple jackets to compliment the famous yellow and black JEGS apparel.

“That was a cool surprise from Hoosier to give our family those jackets,” Cody said. “We picked up many awards that night and we appreciate all of the CRA Racing sponsors for their support of the JEGS/CRA All-Stars Tour.”

“They are a big reason why we won the championship,” Cody explained. “Their hard work paid off and I am glad to have them as part of the team. Thank you!

Coughlin and his Team JEGS crew are now getting ready for the 48th Annual World Series of Asphalt Racing at New Smyrna Speedway in New Smyrna, Florida on February 14-22.