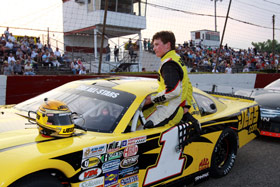 “It’s a lot of fun going down South and racing,” said Coughlin, who lives in Delaware, Ohio. “We experienced that with the Snowball Derby, and then we went to Gresham Motorsports Park in Georgia and ran that race. We’ve had a good time down South.

“We just wanted to go down South again and race. It’s been a lot of fun, people are really nice, and we just enjoy it.”

Coughlin had two top-five and three top-10 finishes in Florida during the World Series of Asphalt Stock Car Racing in February and came home sixth in a 208-lap race at Gresham in April.

“It’s a bunch of fun to race,” Coughlin said. “It’s a nice thing to be able to travel around to different tracks because I know some drivers only get to race at one or two tracks and don’t get to experience all the tracks we’re fortunate enough to get to go to. That’s definitely a plus. I’m so thankful to the Lord for this chance to race.

“I really enjoy going fast, so I guess that’s where it all started. As far as me going in circle instead of straight (like the rest of his drag racing family), I don’t really know. I guess I wanted to stay in the car a little bit longer.”

Coughlin’s family is heavily involved in drag racing, but Cody decided to go the stock-car route. He’s a big NASCAR fan and follows all forms of motorsports.

This weekend, Coughlin will be buoyed by the addition of NASCAR veteran Kevin Hamlin as team manager for the JEGS.com team. Hamlin was a crew chief in NASCAR for 15 years, working drivers like Dale Earnhardt, Kevin Harvick, Jeff Burton and Brian Vickers.

“We’ve had a chance to play golf and talk, so we’ve got a really good level of communication,” Coughlin said. “I’m very excited to work with him. He’s a very nice guy and wants to see us succeed. I’m excited about the way things are going with him. I think he’ll bring a lot of organization and a lot of experience to help us move forward with our race team and my career.”