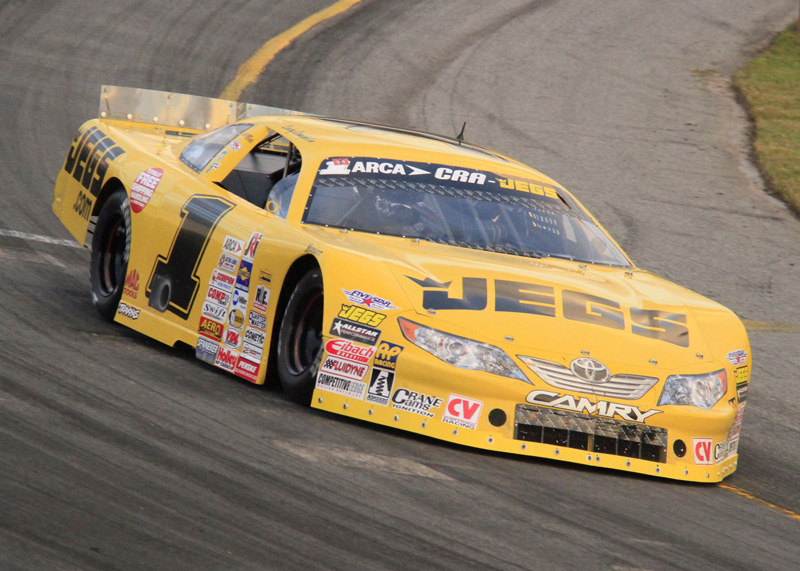 After a great start in the ARCA Racing Series opener last month at Daytona International Speedway, Cody Coughlin is ready to go Super Late Model racing once again.  The Joe Gibbs Development driver will strap into his JEGS Toyota Camry this weekend and make his first start in the Rattler 250 at South Alabama Speedway in Opp, Alabama.

The 19 year-old driver will team up with his Team JEGS crew to compete in the Southern Super Series opener this Sunday, March 15th  in the 39th edition of the event.

“I am ready to get back in the seat and hopefully have some more success this weekend,” said the Delaware, Ohio native.  “I haven’t raced at South Alabama Speedway much in the past, but we are hoping to go there and start our Super Late Model season off on the right note.”

Coughlin competed at South Alabama Speedway in 2012 when he ran two Viper Pro Late Model Series events in a Bubba Pollard prepared race car.  He has two top-ten finishes at the 4/10-mile oval.

“We had good speed the last time we were there.  I expect us to be really good with all we’ve learned and how much I have grown as a driver since then,” Coughlin exclaimed.  “We are going to make the most of our opportunity this weekend.”

This will be Coughlin’s second start in the Southern Super Series.  His previous start came at the 2013 All-American 400 at the Fairgrounds Speedway Nashville (TN) where he started seventh and finished 13th.

The Rattler 250 is one of the top Super Late Model events in the country and draws some of the best drivers in short track racing.

“Anywhere we go to race this year, we will be competing with some of the best short track teams in the country,” said Coughlin.  “The Rattler’ is one of those marquee events.  It would be awesome to add my name to the list of winners for this race.”

Coughlin will not be returning to Super Late Model action alone this weekend, as he will be reunited with his Team JEGS crew.   The team will once again consist of: Kevin Hamlin, Team Manager; Nick Easton, Crew Chief; Scott Wimmer, Spotter; and Dave Holt, crew-member.

“I cannot wait to work with my Team JEGS crew this weekend and try to get some more wins with them,” Coughlin said with a smile.  “We have visited victory lane in the last two seasons and it would be cool to continue that streak this weekend.”

Along with the Team JEGS crew, he will also have the love and support from his family, which includes his parents, John & Di, and his sister, Kennedi.

“Going to the racetrack continues to be a great family experience for all of us; their support means to much to me, especially with everything going on this year,” Coughlin noted.  “We are also a faithful family and for us to pray together as a family before the race is important to me.  We are very blessed by God for what he has given us and who he has surrounded us with.”

Coughlin will be on track on Friday, March 13th for practice from 11am until 3pm.  On Saturday, March 14th, there will be a morning practice session from 9:30am until 11am with qualifying for the Rattler 250 at 3pm.

On Sunday, March 15th, fans will have a chance to meet Cody during an on-track autograph session from 1pm to 1:30pm.  The green flag for the Rattler 250 is scheduled for 2pm.

All times listed above are Central times.