Cody Coughlin Hoping for a Buckeye Win this Saturday at Toledo 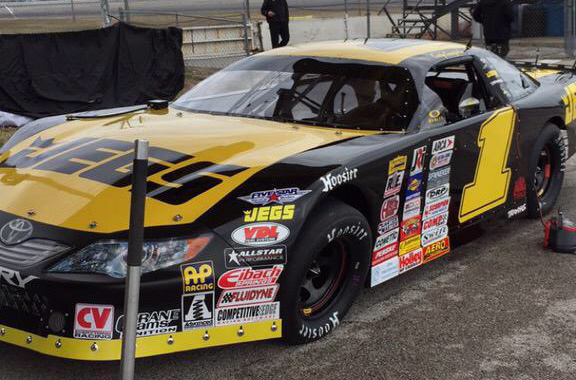 The Ohio State Buckeyes made this year’s NCAA Basketball Tournament, but another Buckeye is hoping to go all the way to victory lane this weekend.  Ohio native Cody Coughlin will attempt to sink a “buzzer shot” when he and Team JEGS competes in the ARCA/CRA Super Series powered by JEGS season opener at Toledo Speedway in Toledo, Ohio.

Coughlin will make the two-hour trek from his home in Delaware, Ohio to compete in the 7-Up 100 this Saturday afternoon at the half-mile, high-banked oval.

This will be the fourth overall start for the Joe Gibbs Development Driver at Toledo Speedway and his second in a Super Late Model.  Last year he competed twice at Toledo.  He had a seventh place finish in the Border Wars 150 Super Late Model event and finished sixth in the ARCA Racing Series event.

“I think we should have had better finishes than what we have had in the past at Toledo,” Coughlin expressed.  “I think it is time for us to get a win there for sure.”

Recently, he and his Team JEGS crew had a chance to test at the famous track located north of downtown Toledo, Ohio.

“The practice went really well,” said Coughlin.  “The team worked great together and we feel that we have a good feel for this Saturday’s race.

“Toledo is just another place where you want the car to be secure and turn well, along with having the drive off the corners.  It’s fast and I love that type of racetrack.”

Coughlin feels, with the strength of his team, he will be a contender on Saturday.

“There will be a lot of great drivers competing in this race.  I think the key for us will be how we prepare,” explained Coughlin.  “If we do our part, we can beat anyone.”

With this race being close to his hometown, many family and friends will have an opportunity to watch Coughlin race this Saturday.  This includes his parents, John & Di, and his sister Kennedi.

“Anytime we race in Ohio, it’s an opportunity for our family and friends to come to the track and cheer us on,” Coughlin said.  “I continue to be very grateful of the love and support I get from my family.  They do a lot to help me achieve my goals in racing.

“I also have thank God for his continued blessings.  We recently celebrated Easter and it’s a reminder of the sacrifice he made on the cross for us.  I am thankful every day for this amazing gift he gave for all of us.”

Cody Coughlin will be on track for an open practice on Friday, April 10th from 3-7pm.

Final practice will take place on Saturday, April 11th at 11am with qualifying at 1pm.  There will be an on-track autograph session following qualifying.  Racing gets underway at 3pm Eastern.

Speed51.com’s 51TV will have a live pay-per-view broadcast of Saturday’s race.  You can order online at: http://speed51.com/51livetv-events/