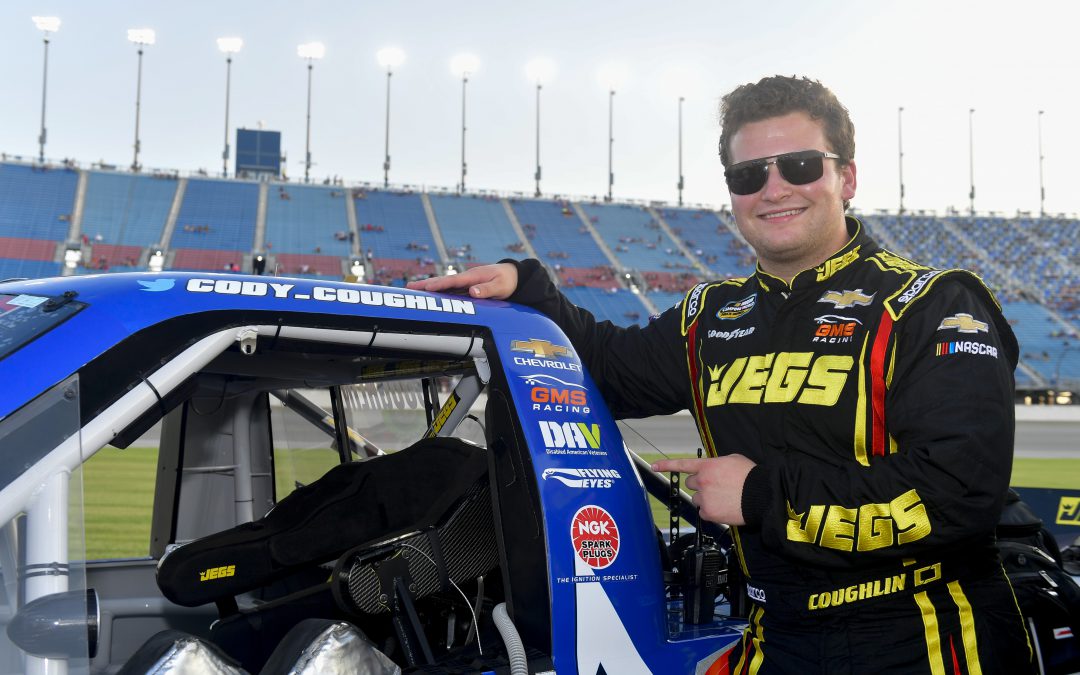 STATESVILLE, N.C. (June 30, 2018)—Cody Coughlin, driver of the No. 2 JEGS Chevrolet Silverado, looked to contend for his seventh top-10 finish of the 2018 NASCAR Camping World Truck Series (NCWTS) season in the Overton’s 225 at the Chicagoland Speedway located in Joliet, Ill., on Friday, June 29, but pit road adversity proved to be a huge battle.

Coughlin and his No. 2 GMS Racing team went on a rollercoaster ride of emotions in the ‘Windy City.’ Even when struggling with an ill-handling JEGS Chevrolet Silverado for most of the race, Coughlin and the GMS Racing team never gave up. Coughlin was able to climb as high as the sixth-place, but was also scored as low as 20th-place due to an untimely return to pit road late in the race.

When the checkered flag did finally wave, the driver of the No. 2 JEGS Chevrolet Silverado for GMS Racing had rallied as much as he could, and finished in the 12th-place out of the 32-truck field.

“Another tough night for our No. 2 JEGS Chevrolet Silverado team,” Coughlin said. “We are confident that our time is coming. The team will regroup over the short break, and we’ll head to the Kentucky Speedway with the determination and motivation needed for a top-five finish – or a win. I am confident in Jerry (Baxter) and my JEGS team that we can rally together.

“The entire team works so hard, and I appreciate it.”

Coughlin, part of the four-truck GMS Racing contingent, set the 12th-fastest lap in qualifying for 225-mile race, and turned a lap of 31.273 seconds at 172.673 mph around the 1.5-mile track in the final qualifying round.

The 22-year old had earned three-straight top-10 finishes coming into the Chicagoland Speedway and hoped to be on his way to another, qualifying solidly in the 12th-place for Friday night's 150-lap event.

Coughlin quickly moved toward the front of the field as soon as the green flag dropped, but alerted crew chief Jerry Baxter that he was battling a loose-handling condition on the No. 2 Chevrolet during the opening laps of the race. The Delaware, Ohio, native restarted in the 11th-place after the first caution flag waved, and with a great restart moved to the eighth-place. At the end of Stage 1, Lap 35, Coughlin was scored in the 10th-place – earning stage points. Under the stage caution, Baxter called for four tires, fuel and a chassis adjustment in an attempt to alleviate the handling issues Coughlin was fighting.

In the second 35-lap stage, Coughlin's No. 2 JEGS Chevrolet Silverado looked to be strong as he methodically picked his way through the field. Coughlin quickly moved to the sixth-place by Lap 42, and posted his quickest lap of the race on Lap 45. Maintaining in the top-eight, he continued to report handling woes in the No. 2 Chevrolet on Lap 50. As Stage 2 came to a close on Lap 70, Coughlin was in the ninth-place, and picked up valuable stage points, again.

Baxter called for chassis adjustments, fuel and four tires under caution on Lap 73. After an issue with the refueling, and a possible loose wheel, Coughlin returned to pit road and was scored in the 20th-place, but after the cycle on pit road, he was in the 15th-place for the restart. By Lap 90, he was closing-in on the top-10 again. As the field remained under green flag conditions, the leaders began coming to pit road for their scheduled stops. The No. 2 Chevrolet was still too loose which led the pit crew to make major chassis adjustments on the anticipated pit stop as Baxter left Coughlin on the track for as long as possible. He attempted to come to pit road, but an untimely caution on Lap 122 did not play in his favor for the anticipated green-flag stop. On Lap 124, Coughlin was finally able to pit for four tires, fuel and a chassis adjustment, but the changes were eventually too much, and his machine began to have tight-handling conditions around the 1.5-mile speedway. As the race progressed, Coughlin worked his back to 12th-place in the running order to cross the finish line.

Coughlin, and the rest of the No. 2 JEGS Chevrolet Silverado team will get a weekend off from the track before returning to action with the NASCAR Camping World Truck Series at the Kentucky Speedway.

The next event on the NASCAR Camping World Truck Series schedule is the Buckle Up in Your Truck 225 on Thursday, July 12, at the Kentucky Speedway in Sparta, Ky. The FS1 and Motor Racing Network (MRN) will broadcast the race starting at 7:30 p.m. (ET).