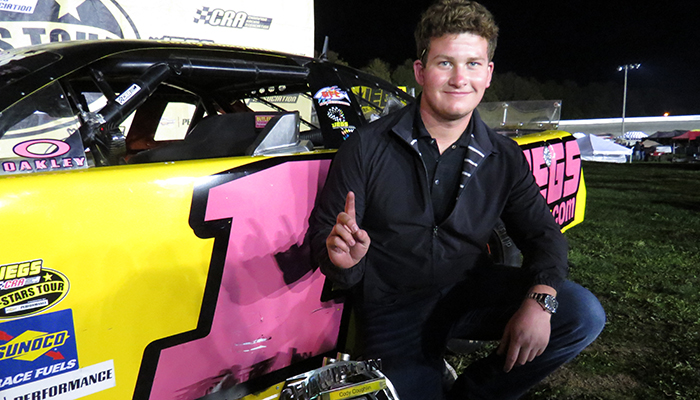 By simply starting his engine, Cody Coughlin and his Team JEGS crew accomplished their pre-season goal, as he is the 2013 champion of the JEGS/CRA All-Stars Tour. Coughlin finished 19th in the 100-lap season finale at Winchester Speedway in Winchester, Indiana.

“This is awesome to see everyone jumping up and down, the smiles on our team and families faces are priceless,” Coughlin said after the race during a wild celebration led by his father John Coughlin. “We all worked our butts off this season and this…this is the big payoff right here.”

Cody was hoping to come in the finale at Winchester and pick up his third win of the season in the JEGS/CRA All-Stars Tour. But a cut tire on lap 32 sadly ended his night when he made contact with the wall in turns one and two.

“It wasn’t the night we hoped for as we had a competitive car,” Coughlin said. “But I can still smile that our team accomplished a major goal this season.”

Coughlin also has a lot of respect and appreciates the competition he faced this season in the Tour.

“I have to tell you, the JEGS/CRA All-Stars Tour has the best and tough competition around,” Coughlin said. “With the rules and running the crate engines, this is a good series to learn to race at a variety of tracks. I feel our team has learned a lot by running this series and I think we are prepared for our next challenge, no matter where it is at or who we race against.

“Also, big applause to Glenn Luckett and RJ Scott with Championship Racing Association (CRA). They are one of the top short track series in the country and for them to put this series together a few years ago; it is really starting to payoff. There is a lot of talent out there and every race was tough and exciting. Thank you for creating a series for us to compete in this year.”

This championship does not just fall on the driver, but the entire team.  This year, the Team JEGS crew ran like a well-oiled machine all year long.

“Man, I am speechless at what this team has done all year to make this season a success,” Coughlin said. “The Lord gives each of us special talents and gifts and we all used them to make this a success. If it wasn’t for their hard work and dedication, we wouldn’t be here now.”

Hopefully, this is a start of string of championships to roll into the JEGS headquarters and family this year.

“Uncle Jeg is doing an awesome job in his NHRA Pro Stock and has the point lead. We are definitely cheering him on to win that title,” Coughlin said. “I hope I start a good string of championships this year.”

It is not just the team that helped Cody achieved his goal, but also the love and support of his family.

“My parents John & Di and my sister Kennedi have been great motivators all year long,” Coughlin said. “I sometimes get a little tough on myself and they help reel me in and remind me to enjoy things in life and cherish moments like this. I really thank them for being there for me.”

Coughlin and the Team JEGS crew will now head south to New Smyrna Speedway in Samsula, Florida to compete in the Governors Cup 200 on Saturday, October 26th.