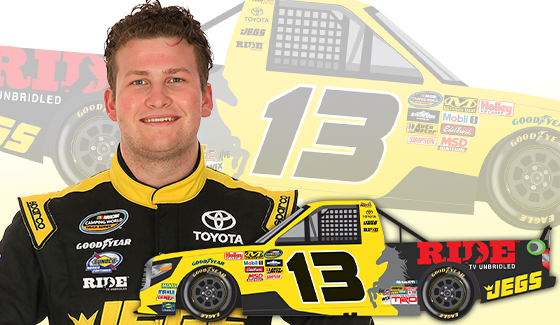 Sandusky, Ohio – ThorSport Racing announced today that Cody Coughlin, who made history in 2016 as the first driver to win both the ACRA/CRA Super Series and JEGS/CRA All-Stars Tour Championship in the same season, will join the Sandusky, Ohio-based team in 2017. The 21 year-old driver will compete full-time in the NASCAR Camping World Truck Series (NCWTS) behind the wheel of the No. 13 JEGS/RIDE TV Toyota Tundra. Coughlin, a third generation driver, will also compete for Rookie of the Year honors in addition to the series championship title.

"ThorSport Racing is a great team, one I've always admired at the race track,” said Coughlin. “Their professionalism, the speed they display, and their record, speaks for itself. Considering the team and I are both based in Ohio, it makes for a great fit, and I'm proud to be part of this championship-caliber organization.

“Matt Crafton and I became good friends last year,” Coughlin continued. “His insight and help with driving these Toyota Tundra’s at all of the different tracks has been a valuable asset, and to be his teammate this year, takes it to the next level."

Coughlin began his oval track racing career in Quarter Midgets, but has since mirrored the paths of NASCAR stars, competing in Late Models, the ARCA Racing Series presented by Menards and now the NCWTS. In just two part-time seasons in ARCA (2014 & 2015), Coughlin earned two poles, and led 23 laps en route to five top-five and 11 top-10 finishes. Since 2015, the third generation driver has made 12 NCWTS starts, including 10 starts in 2016 for fellow Toyota team, Kyle Busch Motorsports.

Coughlin will continue his partnership with JEGS Automotive, Inc., a premiere source for high-performance parts for racing enthusiast around the world, in 2017. The Delaware, Ohio based company will be one of two primary sponsors of the No. 13 Toyota Tundra. Additionally, Coughlin welcomes Ride Television Network, Inc. (RIDE TV), a 24-hour, high-definition television network, dedicated to providing quality entertainment to equestrian and agriculture enthusiasts.

Coughlin’s 2017 campaign will be lead by veteran crew chief Michael Shelton. Shelton, who most recently called the shots for John Wes Townley in the NCWTS, has been atop the pit box in the series since 2009, and has one championship (James Buescher, 2012), and seven wins to his credit in 134 races. Former NASCAR K&N Pro Series East crew chief, Rich Lushes, will be the No. 13 team’s truck chief in 2017.

Coughlin is set to make his second career start at Daytona (Fla.) International Speedway on Friday, Feb. 24, piloting the No. 13 RIDE TV Toyota Tundra in the season-opening NextEra Energy Resources 250. All the action will be televised live on FOX Sports 1, MRN and SiriusXM NASCAR channel 90 at 7:30pm ET.

ThorSport Racing, based in Sandusky, Ohio, is the longest-tenured NASCAR Camping World Truck Series team. ThorSport Racing, which has competed in the NCWTS since 1996, will run the No. 88 Menards Toyota Tundra driven by two-time NCWTS drivers' champion Matt Crafton, and the No. 13 JEGS/RIDE TV Toyota Tundra driven by Cody Coughlin. For more information visit www.ThorSport.com.