Cody Coughlin Looking for a Green Jacket in Missouri This Saturday 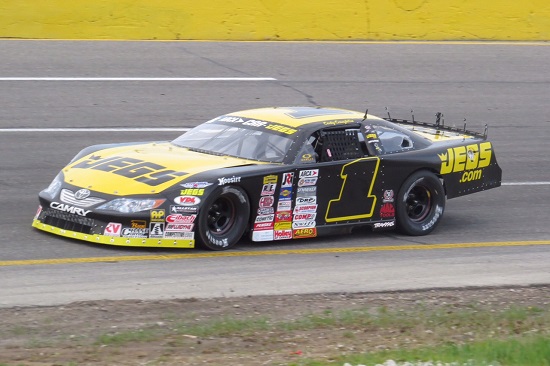 Cody Coughlin is a huge fan of golf.  He enjoys watching the players at the top of their game at events such as The Masters.  While he can swing a club well, he knows he will never don a green jacket at Augusta (GA).  He does, however, have a chance to be accepted into the green jacket club this weekend when he races in Missouri.

Coughlin will make his first start of the season in the JEGS/CRA All-Stars Tour’s Mercy Master of the Pros 144 Saturday at I-44 Speedway in Lebanon, Missouri.  The winner of that event gets a special green jacket, just like what the winners of The Masters golf tournament receives every year.  This is something the 19-year-old from Delaware, Ohio wouldn’t mind adding to his collection.

“That would be awesome to win the green jacket,” exclaimed Coughlin.  “I really enjoy golfing during my downtime and Augusta National Golf Course is one course I hope to play someday.  To win something like that in an auto race, and be part of a small group of drivers to win it, would be incredible.”

After a stellar finish in his first road course race this past weekend in the ARCA Racing Series (sixth at New Jersey Motorsports Park), Cody Coughlin is ready to return to an oval track this weekend.   The Joe Gibbs Development driver is going back to the series he was a champion of in 2013.  He is also looking forward to returning to the 3/8-mile high-banked oval in this marquee event that pays $8,000 to the winner.

“We are excited about racing at I-44 again; we had a strong run when last visited the track in 2013,” recalled Coughlin.  “We started seventh and finished sixth.  This time I think we can go back there and be in contention for a win.”

It will be Coughlin’s 36th start in the JEGS/CRA All-Stars Tour.  He has two wins, 13 top-five’s, 21 top-10’s and two fast qualifier awards in the series.

His family will also make the trek to Missouri to cheer on Cody this weekend.  This includes is parents, John & Di, his sister Kennedi, and other family & friends.

“My family is part of the team and they do their part to help us be successful,” explained Coughlin.  “They provide great spiritual motivation to all of us and that shows with the success on the track.

“We are approaching halfway through 2015 and I really have to thank God for the great season we have had so far with our racing program.  We have had some success and worked through some challenges.  He has blessed us with safe travels and racing at each event.  I am very thankful to have Him in my life.”

Coughlin and the Team JEGS crew will be at I-44 Speedway on Friday for practice from 4-8pm.

On Saturday, the first practice begins at 12:30pm with qualifying at 3:30pm.  Fans will get an opportunity to meet Coughlin during an autograph session starting at 4:15pm.  The racing action will get underway at 5:30pm central time.