Cody Coughlin Looking to Add to Family Success in Indianapolis 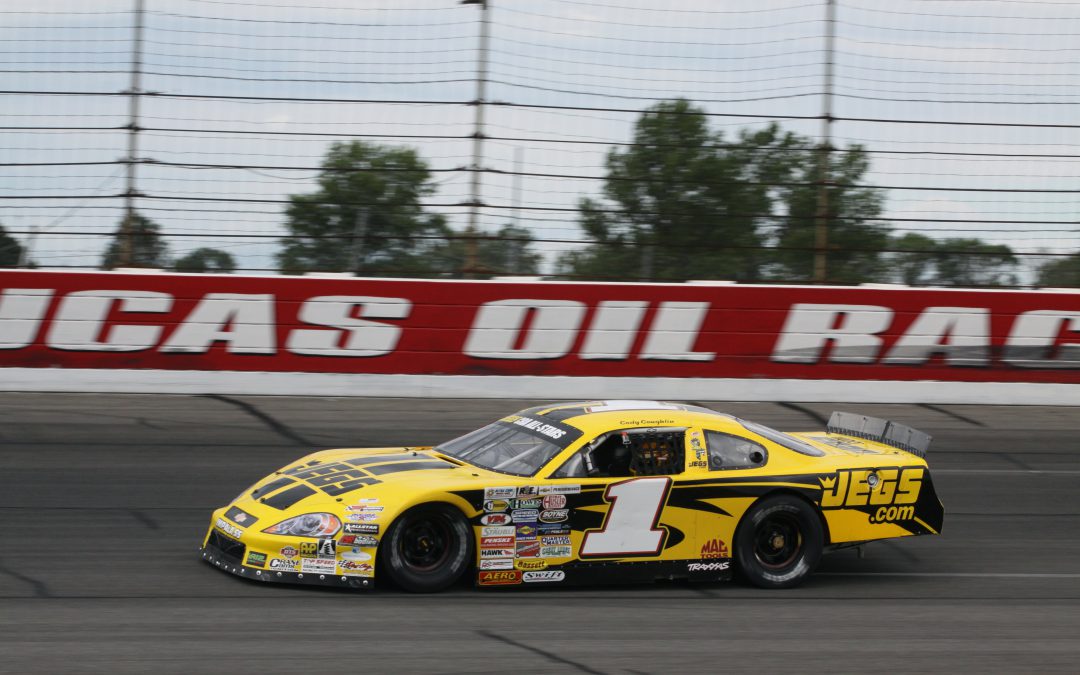 CONCORD, NC (August 14, 2012) – The Coughlin name has been synonymous with drag racing success in the city of Indianapolis, in particular, the prestigious U.S. Nationals NHRA events.  Three generations of Coughlins have earned victories and other accolades in straight-lining their way to success in the “Circle City.”  Jeg Coughlin, Jr. has four U.S. Nationals victories.  Mike Coughlin has two.  Troy Coughlin has another and John Coughlin has five NHRA Division 3 Championships in Indianapolis.  Among the newest generation of Coughlin drag racers, Troy’s son T.J., has a Super Comp U.S. Nationals title under his belt.

Sixteen-year-old Cody Coughlin will be competing this weekend in Indianapolis, but will be taking a slightly different route to success than his father John and the rest of his family have over the years.  Coughlin will look to conquer the oval track at Lucas Oil Raceway outside of Indiana’s capital city, instead of on the adjacent drag strip where his family has triumphed over the years.

Coughlin will pilot his No. 1 Chevrolet in the JEGS/CRA All Stars Tour Commonwealth Engineers 100 presented by JEGS, a part of the CRA “Fall Brawl” event at the .686-mile Lucas Oil Raceway oval September 29th and 30th.

“I've been going to that facility since before I could talk," said Coughlin with a smile. "I have a lot of great memories from that place. My family has such a great history there, I only hope that I can add a new chapter to that with a win on the oval track."

To prepare for the weekend’s event at Lucas Oil Raceway, Coughlin and his JEGS team, led by crew chief Ben “Butch” VanDoorn and team manager Kevin Hamlin, recently shook down the No. 1 at the historic facility.  After a day’s worth of test laps, Team JEGS enters the Commonwealth Engineers 100 poised for a strong run.

“We made a lot of improvements to the car in the test from the last time we were there," added Coughlin. "In fact, it was the most productive test yet. We made the car turn so much better so I am looking forward to racing there this weekend with my team and my dad (John), mom (Di) and sister (Kennedi).  I think we can compete for the win."

Coughlin has two career starts at Lucas Oil Raceway in the JEGS/CRA All-Stars Tour.  He finished seventh in his debut at the track in 2011, a year in which he earned the JEGS Tour’s Howie Lettow Memorial Rookie of the Year title.  He was 12th in the series’ first visit to LOR this season, overcoming a pre-race mechanical issue that forced him to start at the tail of the field.

In his most recent race this year, Coughlin finished seventh in the Piney Lasky Memorial V TBRA Series event at Pennsylvania’s Motordrome Speedway on September 8th.

This week practice and qualifying for the Commonwealth Engineers 100 presented by JEGS will be held Saturday, September 29th at Lucas Oil Raceway.  The 100-lap JEGS/CRA All-Stars Tour feature will precede the ARCA/CRA Super Series’ Jack Links Beef Jerky 100 at LOR.  Team JEGS is led by the aforementioned VanDoorn and Hamlin as well as driver coach Bubba Pollard and spotter Scott Wimmer.

Following the Lucas Oil Raceway event, Coughlin will continue his 2012 season on the high-banked, half-mile Winchester Speedway in Indiana.  The Winchester 100 presented by JEGS will be held as part of the historic Winchester 400 weekend on Friday, October 12th.