Cody Coughlin Looking to Have Some Fun at Auto City 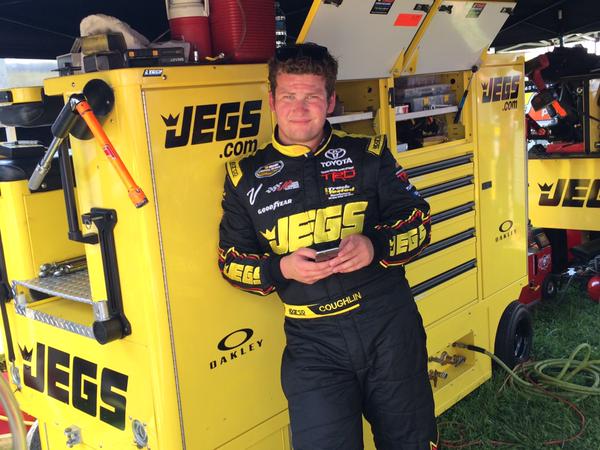 Cody Coughlin decided recently that he wanted to have more fun and hone his skills as a racer.  Well, for the 19-year-old that meant competing in more Late Model races.  Coughlin, a Joe Gibbs Racing development driver is heading to the Dog Days of Summer 100 on Saturday, August 8, at Auto City Speedway in Clio, Michigan this weekend with the JEGS/CRA All-Stars Tour.

"I like the place," said Coughlin, driver of the No. 1 JEGS.com Toyota Camry.  "It's a very unique race track.  Turns one and two are not characteristic of any other track, but three and four are more like a typical race track.  It takes a good handling car to run well there, and my crew chief, Nick Easton, always gives me one of those."

Coughlin finished second at Auto City in 2013, the year he won the JEGS/CRA All-Stars Tour championship.  He believes that this could be the weekend he breaks into victory lane at the tricky track.

"I think we've put ourselves in position to win there multiple times," Coughlin said.  "We've just had some bad luck that has kept us out of victory lane.  But with the help of Nick, my spotter Scott Wimmer, Kevin Hamlin and Dave Holt, I think we'll be good to go and will be contending for a win."

The last time on track for Coughlin was a couple of weeks ago at Indiana's Lucas Oil Raceway.  After suffering a flat tire, Coughlin persevered, overcame and battled his way back to a strong third-place finish.

After the run at LOR, Coughlin believes that he and his Team JEGS guys now have momentum on their side as they head to Michigan.

"That was a good bounce-back run for us," said Coughlin.  "I think we now have lots of momentum.  The car ran so well that weekend.  We've been searching for a good baseline setup for me and what I like and I think we're extremely close now, so that's very exciting."

Coughlin doesn't do much racing these days with this particular series, but when he does, he admits it's a great feeling to return to a series as a former champion.

"Anytime you're a past champion you feel special to be a part of that series," Coughlin said.  "I know that I'm in great company with the other former champs.  It’s been a big part of building me as a racer."

Coughlin will return to the track with his father, John, his mother, Di, and his sister, Kennedi there to cheer him on.  The Michigan half-mile speedway is not too far from the Coughlin’s home in Delaware, OH.

"It's always great to have my family at the track with me," said Coughlin.  "I have some great fans, but they're my biggest fans, and I'm very thankful for what they've given me and allow me to do.

"I'm also incredibly thankful that God has blessed me with so many great opportunities.  Without him, none of this would be possible."

Fans will have a chance to meet Cody Coughlin just before the start of the race on Saturday during an on-track autograph session at Auto City Speedway.  The event is scheduled to go green at approximately 8pm.  Coughlin and his team have a hour practice session at 4pm with qualifying planned for 6:15pm.