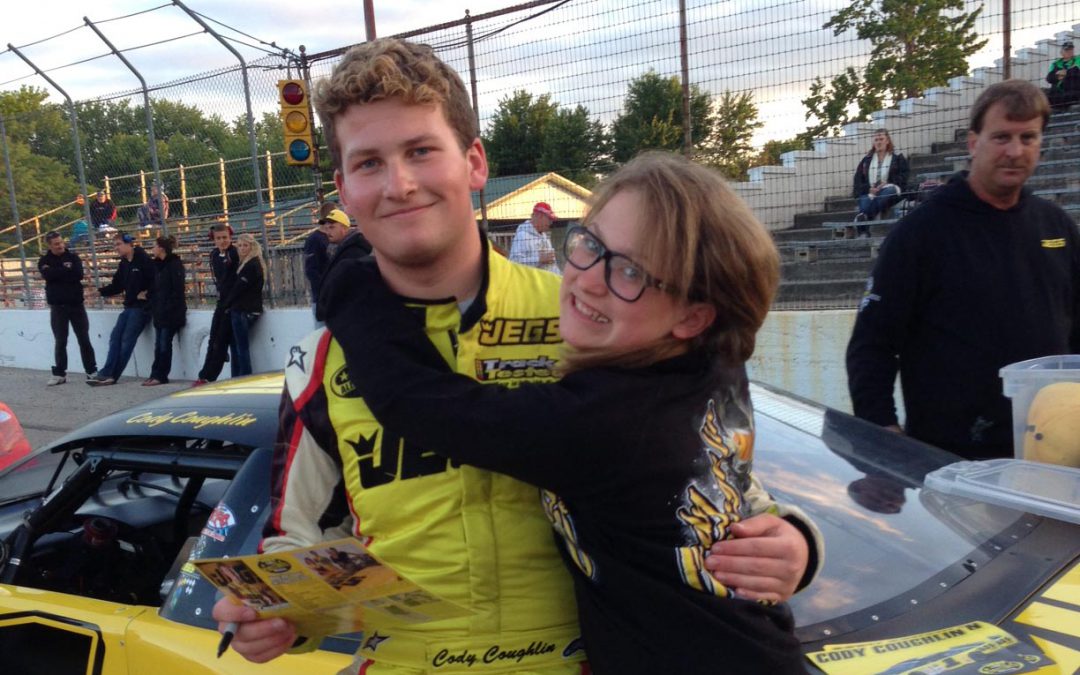 When Cody Coughlin looked at the 2013 JEGS/CRA All-Stars Tour schedule, he saw June 14 at Berlin Raceway on it.

The 17-year-old driver from Delaware, Ohio driver looks at the 7/16-mile oval as a personal challenge. But his optimistic attitude and momentum coming off his first series win last Friday night could bring a positive outcome this Friday night.

“This track will be a challenge for us, but if we can win or have a strong top-five finish along with beating the other competitors going for the JEGS/CRA All-Stars Tour championship, we could be in a good position for the title,” Coughlin explained. “After Berlin, we have some tracks coming up that we know we can do very well at and have strong finishes.  Berlin will be a big step to our goal of winning the 2013 championship.”

This will be the second time that Coughlin and his Team JEGS crew will be competing at the Michigan speedway.

“We ran at Berlin back in 2011, when we won the Rookie of the Year title, and didn’t have a good run at all that day,” Coughlin recalled. “But we recently tested there and things went very well.  We worked out a few bugs and got a good baseline setup for Friday. We are going to be good.”

Coughlin is coming into the Marne, Michigan track with incredible momentum.  Last Friday, he swept the night at Dixie Motor Speedway in Birch Run, Michigan.  Not only did he win the race, but was also the fast qualifier and took over the points lead.

In order to have another repeat of the Dixie performance this weekend at Berlin, Coughlin knows that tire management will be key in the 100-lap JEGS/CRA All-Stars Tour feature.

“I have learned that you need to be patient in the early going and not go as hard as some of the other drivers do,” Coughlin said. “The key is saving it for the end, especially the tires, which will wear out fast at Berlin.  If we have a good balance on our tires and didn’t burn up the right rear, we have a good shot at a good finish or go for the win like we did last Friday night.”

Coughlin is also eager to meet with the fans at Berlin Raceway and represent JEGS Performance Parts.

He will have a strong crew backing him up again including Freddie Query (Consultant/Chassis Specialist), Nick Easton (Crew Chief) and Scott Wimmer (Spotter).

He will also have his family support from his parents John and Di, and his sister Kennedi, his biggest fan.

“I am very blessed to have this kind of support behind me,” Coughlin said. “God has given all of us unique talents and it is really cool when we can all share them as a team and be successful.”

The JEGS/CRA All-Stars Tour Battle at Berlin 100 is this Friday night at Berlin Raceway in Marne, Michigan starting at 7pm. Speed51.com will have live Trackside Now coverage of the event.