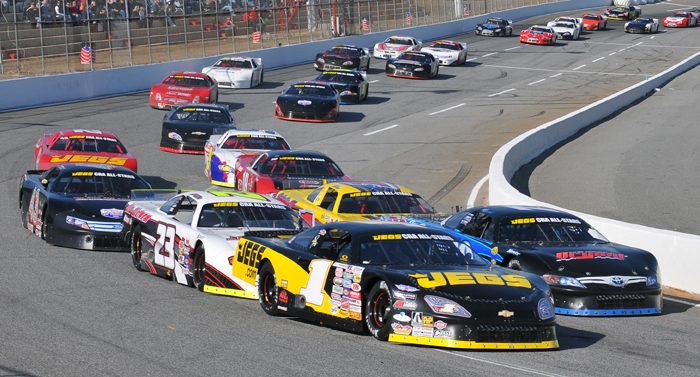 Whether it’s on the high banks of Daytona International Speedway or at New Smyrna Speedway’s half-mile bullring, success during Florida Speedweeks in February for any stock car racer is the pinnacle of success.  The sport’s legends have etched their name into Daytona lore over the years, while up-and-coming stars have started their path to NASCAR success just a few miles down Interstate 95 at New Smyrna’s World Series of Asphalt Stock Car Racing.

Seventeen-year-old Cody Coughlin is hoping that his run during this year’s World Series of Asphalt Stock Car racing will kick-start not only his 2013 Late Model racing campaign, but will also lead towards success in the top levels of the sport down the road.

“Florida Speedweeks is a ton of fun,” said Coughlin, who has competed and has several top-10 finishes and fast-time awards in his previous appearances at New Smyrna.  “Being down there with the NASCAR guys over at the big track in Daytona is cool.  The NASCAR guys definitely keep an eye on what’s going on over at New Smyrna and come over to check things out.  That can definitely motivate you just knowing those guys’ have their eyes on you every night.

“You see them run the big track and think, ‘Man, that’s where I want to be,’ then go back to Smyrna and take that motivation with you and a lot of times it leads to success.”

Coughlin had several strong runs during the 2012 edition of the World Series of Asphalt Stock Car Racing at New Smyrna with his JEGS No. 1 Pro Late Model.  In his most recent trip to the New Smyrna half-mile in November, Coughlin set fast time in qualifying and had to rally back from the back of the pack twice for a top-10 finish in the Florida Governor’s Cup 200.

Over the course of this year’s nine-night World Series, Coughlin will compete in eight Pro Late Model features at a track that he is familiar with and eager to return to.

“New Smyrna is a really neat racetrack for a lot of reasons,” added Coughlin.  “One, it is down in Florida and the weather is always nice down there. Secondly, it’s a big track for Late Models.  It has some straight-a-way, so you can stretch out and breathe a little bit. It’s fairly high banked.  It’s not Winchester (another high-banked half-mile in Indiana) by any means, but it is definitely not flat.  You can get on it (the gas) pretty hard down there, and I like being aggressive with the car.  It is the perfect track for me.

“Plus, the guys on the crew have really been putting a lot of emphasis on this year’s World Series.  Kevin (Hamlin, team manager), Chad (Wood, crew chief), Freddie (Query, chassis builder and consultant), Bubba (Pollard, driver coach) and Scott (Wimmer, spotter) have all been down there and had some success either driving or as crewmembers.  There are a lot of man-hours into this event for our team and I’m excited to get back down to Florida for it all hopefully to pay off with some good runs.  I feel so fortunate to be racing soon, especially with faith and family on my side.”

The 47th Annual World Series of Asphalt Stock Car Racing kicks off on Friday, February 15 and runs through Saturday, February 23.  The eight features in nine nights include seven 35-lap features for the Pro Late Model division, plus the extra-distance 100-lapper on February 21.  Live coverage of all event will be on Speed51.com.