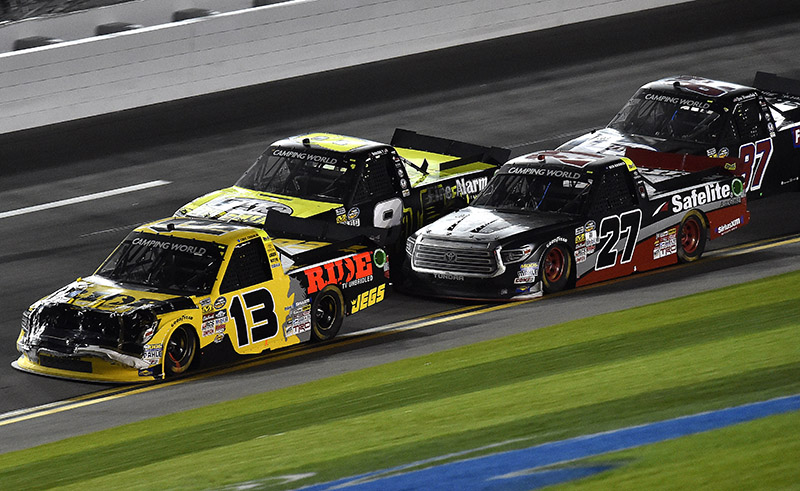 The No. 13 team showed speed during the lone practice session Thursday afternoon – leading the ThorSport Racing fleet with the third fastest time overall. Starting from the 17th position for the 100-lap, three segment race, Coughlin had a long night ahead of him after being collected in a wreck on lap two. After several pit stops for repairs, Coughlin fought his way back through the field several times to put himself in position to compete at the end of the third segment.

With four laps to go, the fifth caution of the night was displayed for a spin in Turn 2, setting the field up for a green-white-checker flag finish. Unfortunately, Coughlin, who was scored 10th, would be collected in the “Big One” on lap 99 of 100 and relegated to an 11th-place finish behind race winner, Kaz Grala. The result was the Sunoco Rookie of the Year contenders career-best finish in 13 NCWTS starts.

“Well, we thought we had a really strong RIDE TV Tundra. It sucked up really well all night. The guys got crossed there at the beginning and unfortunately we just had nowhere to go. My team did a great job fixing up my Toyota Tundra every time we came down pit road tonight, and kept us from going a lap down. We had to start at the tail-end of the field several times, but we were able to work our way back up to the front. I was confident we would have had a Top 5 finish there at the end if we wouldn’t have wrecked, but that’s the deal here at this track, you know its going to happen, you just hope you’re not going to be the one involved.”

·       Coughlin was the third-highest finishing Sunoco Rookie of the Year contender in Friday night’s NCWTS season opener at DIS.