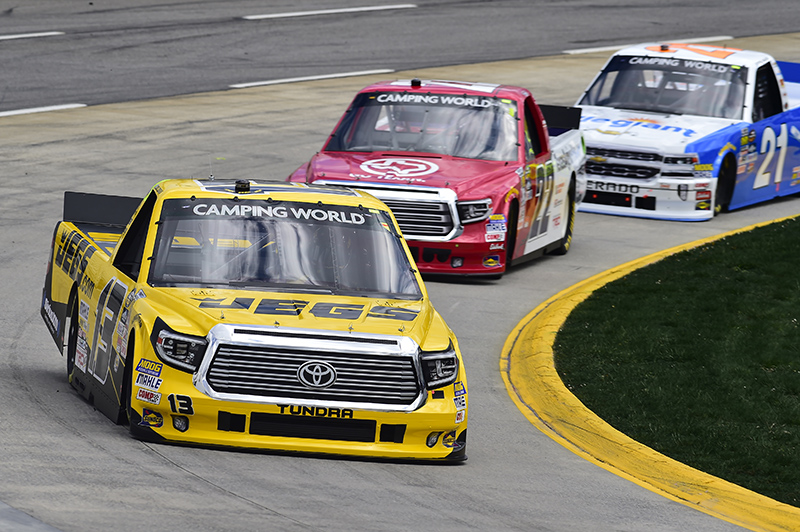 Cody Coughlin, driver of the No. 13 JEGS Toyota Tundra, made his track debut in Saturday’s NASCAR Camping World Truck Series (NCWTS) Alpha Energy Solutions 250 at Martinsville (Va.) Speedway. Starting 27th, Coughlin battled through adversity in the 250-lap event, and was fighting for his first career top-10 finish when he was taken out of contention on the last lap, and settled for a 19th-place finish at the .526-mile track.

Trouble started early for the ThorSport Racing driver when Coughlin’s Tundra went for a spin in Turn 3 on lap 14. The Sunoco Rookie of the Year contender was forced to make a pass-thru penalty, under green, losing valuable track position, and ultimately two laps to the race leaders. Due to pit strategy, and smart driving by the JEGS driver, Coughlin was able to navigate his way through traffic, and with 10 laps remaining in the 250-lap event, found his way back on the lead lap, and scored in the 15th position.

In a 12-lap shootout to the checkers, Coughlin was in a battle for the 11th position when fellow rookie contender, Chase Briscoe made contact on the final lap, and sent Coughlin’s Tundra spinning. The ThorSport Racing driver settled for a 19th-place finish in his track debut behind race winner, Chase Elliott.

“It was rough out there. It’s was just tough to pass because there are a lot of slower trucks, and nowhere to go. We’re all working really hard at ThorSport Racing. We just have to unload off the trailer a little better and qualify a little better, which we will. As a team, we hung in there today and had a good top-10 finish going until we were taken out on the last lap.”

·       Coughlin made his Martinsville Speedway debut in Saturday’s Alpha Energy Solutions 250. The Sunoco Rookie of the Year contender started 27th, ran as high as 11th, and finished 19th in the 250-lap event at the .526-mile track.

·       Coughlin was the fifth-highest finishing Sunoco Rookie of the Year contender in Saturday’s NCWTS event at Martinsville Speedway.

·       In three starts in 2017, Coughlin has one top-15 and three top-20 finishes, including a career-best 11th-place finish at Daytona (Fla.) International Speedway.