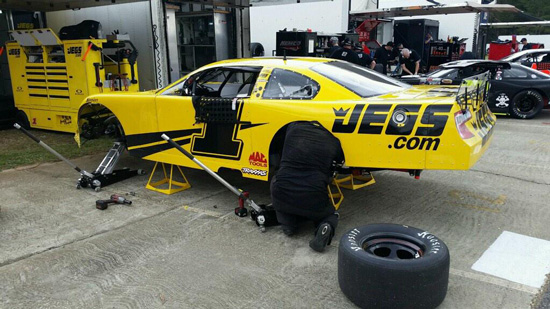 The Southern Super Series Rattler 250 will be the first race of 2015 for Cody Coughlin in his JEGS Toyota Camry Super Late Model.  Last year, the now-19-year-old from Delaware, Ohio made seven starts in Super Late Model competition with one win, three top-five and five top-10 finishes.  He competed in four races in the ARCA/CRA Super Series powered by JEGS, two races during the World Series of Asphalt Stock Car Racing and the Florida’s Governor’s Cup 200 at New Smyrna Speedway (FL).

Back to South Alabama Speedway

Cody Coughlin last competed at South Alabama Speedway on August 25, 2012.  He raced a Bubba Pollard prepared race car in a Viper Pro Late Model Series 100-lap event.  He finished eighth in that race.  Coughlin also has a ninth place finish in another Viper Series event on July 7, 2012.   The Rattler 250 will be his first start in a Super Late Model at the 4/10-mile oval.

The Rattler 250 will be Coughlin's second race event of the 2015 season. Last month, he competed in the ARCA Racing Series Lucas Oil 200 at Daytona International Speedway.  In his debut at the “World Center of Racing,” Coughlin started on the outside of the front row, led the first eight laps and ran in the lead pack before finishing fourth.  He missed third by just a bumper at the finish line.  Last year in ARCA Racing Series competition, he made 11 starts with three top-five and eight top-10 finishes.

Cody on Television, Radio and More

During the last month, Cody Coughlin has made media appearances on both local and national levels.  This included a feature story on ABC-6/FOX-28 news in Columbus, Ohio, an appearance on Dialed-In with Claire B. Lang on Sirius-XM Satellite Radio’s NASCAR channel and recently on Pit Pass with Brian Till on Time Warner Sports Channel Ohio.  He was even interviewed on Sprint Vision at Daytona International Speedway prior to the green flag for the ARCA Racing Series Lucas Oil 200.

Returning to his Elementary School

Cody Coughlin recently made a visit to his elementary school to read and answer questions to the students at Worthington Christian Elementary School in Worthington, Ohio.  Coughlin participated in the school’s “Celebrate Reading Week” which focused on the writings of Dr. Seuss.  Coughlin read the classic, “My Many Colored Days” to more than 200 students.  Along with reading the book, he also signed autographs and answered questions for the students.