CODY COUGHLIN NOT FOILED BY ENGINE TROUBLE AT THE GATEWAY MOTORSPORTS PARK, RESULTS IN A NINTH-PLACE FINISH 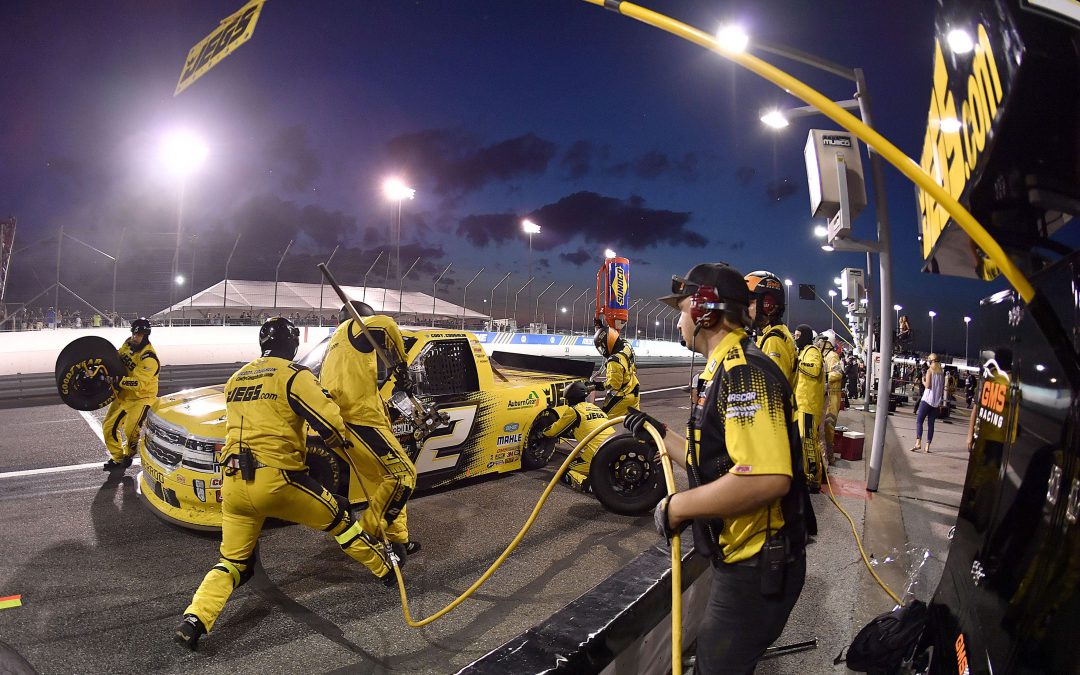 Event: Villa Lighting delivers the Eaton 200 presented by CK Power (Round 10 of 23)

Cody Coughlin Not Foiled by Engine Trouble at the Gateway Motorsports Park, Results in a Ninth-place Finish

STATESVILLE, N.C. (June 24, 2018)—Cody Coughlin was once again in contention to post another career-best finish, but early-race engine trouble prevented him from maximizing his potential, resulting in a ninth-place finish at the Gateway Motorsports Park in Madison, Ill.

The power plant in Coughlin’s GMS Racing’s No. 2 JEGS Chevrolet Silverado began to sour before the caution on Lap 24 as he dropped a cylinder.

Since the sixth-place finish at the Dover (Del.) International Speedway in the JEGS 200 on May 4, Coughlin’s JEGS Chevrolet has been one of the dominating entries in the NASCAR Camping World Truck Series (NCWTS). The only time the 22-year old has finished outside the top-10 was at the Charlotte (N.C.) Motor Speedway – once in the last six NASCAR Camping World Truck Series events.

Saturday was no different for the GMS Racing driver, who drove to a race high of ninth-place in the Villa Lighting delivers the Eaton 200 presented by CK Power in order to score his career-best finish at the Gateway Motorsports Park.

The Delaware, Ohio, native kept pushing in his No. 2 JEGS Chevrolet Silverado throughout the race to maximize speed despite the engine being down on power, and with that perseverant effort, recorded his ninth career top-10 finish in the NASCAR Camping World Truck Series, also his sixth top-10 finish of the season.

“Wow, what a night of racing at the Gateway Motorsports Park,” Coughlin said. “Our No. 2 JEGS Chevrolet Silverado was running on seven cylinders for the whole race – which was hard. Considering we are leaving with another top-ten finish despite engine troubles, it was an awesome accomplishment.

“I am very proud of Jerry (Baxter), and the entire GMS Racing team for their hard work throughout the night. We will get back-after-it next week at the Chicagoland Speedway.”

Coughlin, part of the four-truck GMS Racing contingent, set the 12th-fastest lap in qualifying for 200-mile race, and turned a lap of 32.882 seconds at 136.853 mph around the 1.25-mile track in the final qualifying round.

Coughlin started the 160-lap race from the 12th position and was strong immediately out the gate as he held position for the first five laps. Before the first caution flag waved on Lap 24, Coughlin started to experience the power issue with his No. 2 JEGS Chevrolet Silverado. With a lengthy stop under caution to evaluate the issue, the team looked under the hood but unfortunately nothing could be fixed on pit road. Despite being off the pace, Coughlin remained on track while attempting to diagnose the issue with crew chief Jerry Baxter.

Once racing resumed on Lap 42 for Stage 2, Coughlin maintained pace but was able to diagnose the issue, as he radioed his team that he believed he was down on power. The Team JEGS driver had lost a cylinder.

Despite the power-issues, he was running competitive lap times. Under caution for an incident on the backstretch, on Lap 99 Coughlin returned to pit road for the final time of the night for four tires, fuel and another round of chassis adjustments. Although he dropped a cylinder early in the race, on Lap 142 he posted his quickest lap of the race. Coughlin survived, and triumphed late race restarts to finish in the ninth-place.

The ninth place finish at the Gateway Motorsports Park was the first time Coughlin experienced an engine failure since joining GMS Racing for the 2018 NASCAR Camping World Truck Series season.

The next event on the NASCAR Camping World Truck Series schedule is the Overton’s 225 on Friday, June 29, at the Chicagoland Speedway in Joliet, Ill. The FS1 and Motor Racing Network (MRN) will broadcast the race starting at 9:00 p.m. (ET).