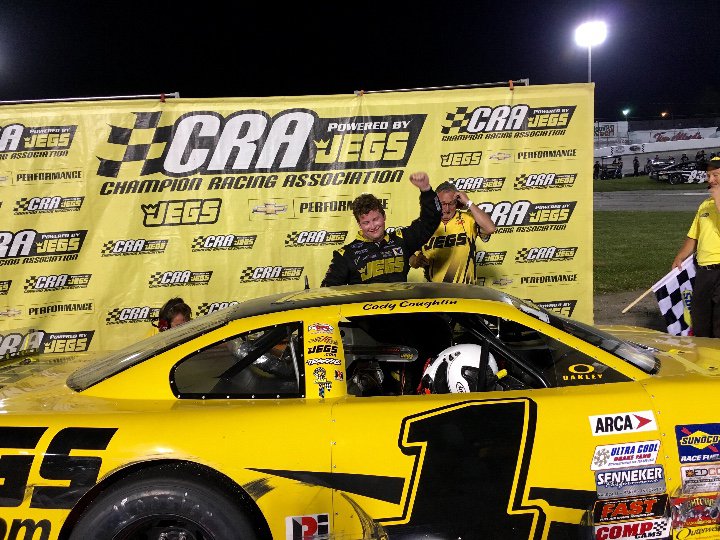 Cody Coughlin ran four races in seven days and ended his marathon week the best way he possibly could, by taking a trip to Anderson Speedway’s victory lane in the Pic-A-Part 100 at Indiana’s high-banked quarter-mile bullring in the JEGS/CRA All-Stars Tour.

Coughlin set fast time with a track record lap of 12.179 seconds, but started sixth after the invert.  He slowly and methodically worked his way through the cars ahead of him, taking advantage of any mistake his other competitors made.

The 20-year-old Delaware, Ohio native worked his way into second before even reaching the halfway mark. After that, Coughlin showed even more patience as he waited for an opportunity to pass his full-time crew chief and part-time competitor, Jack Smith.

With 30 laps to go, the opportunity came for the Joe Gibbs Racing Development driver to pounce.  He drove underneath Smith into turn one and passed Smith with ease off of turn two.

From there, Coughlin was as smooth as possible, even on a 95-degree evening when the track was slippery.

“I like this place a lot,” Coughlin said.  “It’s just very tight so you have to be careful. Thankfully we were able to keep our nose clean and get the win.  I have to thank God first and foremost for the people he as surrounded me with – the glory of this win is all His.”

“I’ve been saying all along that winning races is the best way to win a championship,” Coughlin said.  “When you win races the points situation takes care of itself.  Hopefully we’ve got plenty more wins still to come this year.”

The win at Anderson on Saturday punctuated Coughlin’s marathon week with an exclamation point.  It began one week ago at Anderson in the Redbud 300, then Coughlin travelled to the dirt track of Eldora Speedway for his first experience on dirt in the NASCAR Camping World Truck Series.  Coughlin ran in the top 10 for much of the main event before cutting down a right front tire.  He then travelled to Indianapolis for Friday night’s race where he finished seventh.  Anderson was a culmination of a long week and Coughlin ended it in victory lane.

“It’s been a fun week, an exhausting week, and a week full of learning experiences,” Coughlin said.  “I had fun on the dirt; I got a lot of seat time; we extended our points lead in both series, and I got a win.  I can’t really ask for much more.

“I’m just thankful that I have such a great crew, led by Jack, Kevin (Hamlin, team manager), Scott (Wimmer, spotter), and Dave (Holt, crew member).  I also am so thankful to have endless love and support from my parents, Di and John, and my sister Kennedi. I’m truly blessed to have such a great support system around me.”