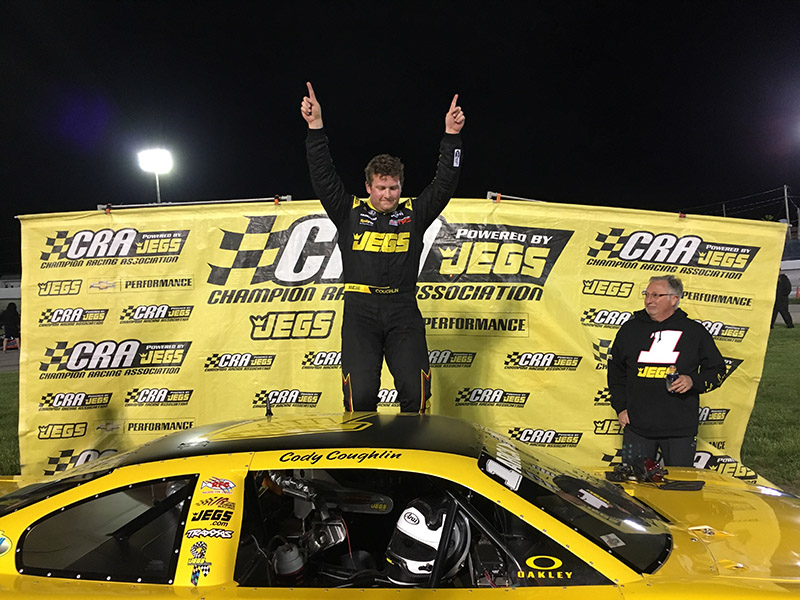 This is Cody Coughlin’s fifth Super Late Model start of the season, and first since his victory at Anderson Speedway on Mother’s Day weekend.

Coughlin has never raced at the half-mile oval of Baer Field Motorsports Park in Fort Wayne, Indiana before, but he did recently test at the facility.  The Delaware, Ohio driver said the test will help him get up to speed faster this weekend.

“Thanks to the test I no longer have to spend the beginning of practice figuring the place out,” said Coughlin, who is the current series point leader.  “Now I can instead focus on the car and making sure I give the best feedback possible to my crew.”

Cody Coughlin’s last Super Late Model race ended with another trip to victory lane.  The Joe Gibbs Racing Development driver led 73 laps on the way to taking the win at Indiana’s Anderson Speedway.  He has a two-race win-streak in the ARCA / CRA Super Series.

The 20-year-old driver’s most recent race was a Pro Late Model event at Missouri’s Lebanon I-44 Speedway where he finished fifth after starting 11th.

Cody Coughlin’s Team JEGS crew will be led by new crew chief Jack Smith.  Since Smith came on board Coughlin has visited victory lane twice and has finished in the top 10 in every start.  Smith is joined by Kevin Hamlin (team manager), Scott Wimmer (spotter), and Dave Holt (crew member).

Baer Field Motorsports Park, originally known as Baer Field Speedway, is a half-mile, mostly flat oval in Fort Wayne, Indiana.  The facility, which consists of the half-mile oval, a 3/8-mile oval, a 1/8-mile dirt track, a 1/10-mile go kart track, and a tractor pulling track, is in its 53rd year of existence.

Made two NCWTS starts this year for KBM.