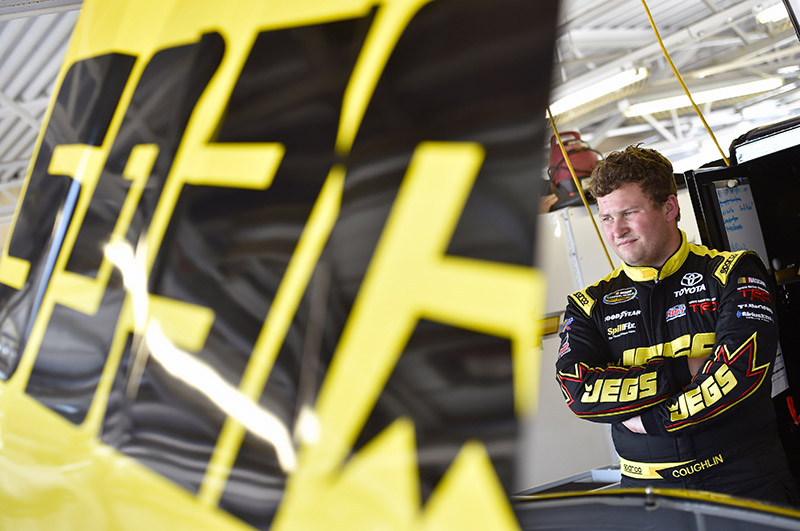 Coughlin will take to the big and fast two-mile oval of Michigan International Speedway on Saturday, August 27 for the Careers for Veterans 200. The race is 100 laps and it will be Coughlin’s second time racing at Michigan in a truck. Coughlin ran well for much of his NASCAR Camping World Truck Series debut one year ago before getting caught up in a crash.

Michigan International Speedway is a two-mile moderate-banked D-shaped oval located in Brooklyn, Michigan in the scenic Irish Hills. The track opened on October 13, 1968.

Cody Coughlin and the No. 51 JEGS.com Kyle Busch Motorsports team will pilot chassis No. KBM-030. This will be the fifth appearance for KBM-030 this season and fourth time with Coughlin. KBM-030 was Coughlin’s truck at Kansas Speedway, Texas Motor Speedway and Pocono Raceway. Saturday at Michigan will be KBM-030’s 12th overall race.  It’s best finish came at Las Vegas Motor Speedway last October when it finished fifth.

Kevin “Bono” Manion will be calling the shots atop the pit box for Coughlin.  It will be the fifth race for Coughlin and Manion as a team. Manion is an accomplished crew chief with a Daytona 500 championship on his resume.  Manion and Jamie McMurray won the 500 together in 2009.

“This will be the first time Cody is going back to a track that he’s already raced at in a truck. From watching last year’s race, I know that Cody had a strong run going and was fighting for a top-10 spot before getting caught up in an accident late. We are bringing the same Tundra that Cody raced at Pocono.  I feel like we made some gains there and showed some more speed at the end, so we’re looking forward to building off of that this weekend in Michigan.”

Cody Coughlin has seen plenty of success so far in 2016 on the Late Model side.  Coughlin currently leads the points standings in both the ARCA/CRA Super Series and JEGS/CRA All-Stars Tour with five total wins between both series (three in Super Series, two in All-Stars Tour).