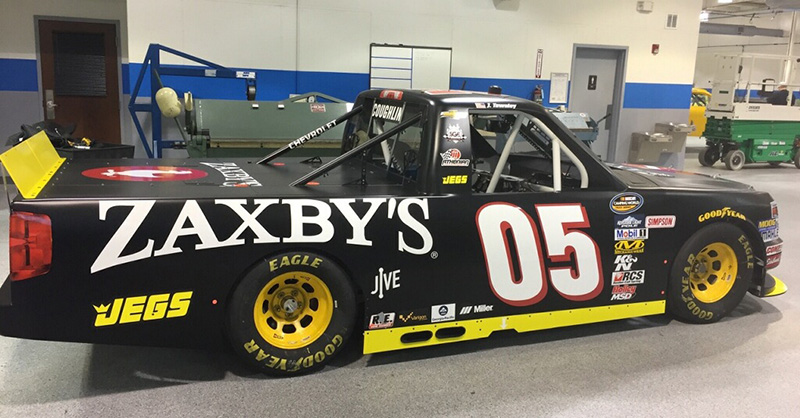 Cody Coughlin is driving the JEGS.com / Zaxby’s No. 05 in relief of John Wes Townley, who is recuperating from a non-racing related injury.  Coughlin is a 20 year-old Joe Gibbs Racing Development Driver.  In 2016, the Ohio native made history by becoming the first to win both Champion Racing Association Late Model titles in a single season.

Friday’s NASCAR Camping World Truck Series event at Texas Motor Speedway is a 220.5-mile event, scheduled for 147 laps.  This is Coughlin’s second NCWTS race at Texas. Texas is the site of Coughlin’s best NCWTS finish – he scored a 12th in the June event.

Texas Motor Speedway is a 1.5-mile race track with 24 degrees of banking in Fort Worth, Texas. TMS currently hosts two NCWTS races. The inaugural NASCAR race held at TMS was won by Jeff Burton on April 6, 1997. Kenny Irwin Jr. won the first ever NCWTS event at TMS on June 6, 1997. Clint Bowyer holds the NCWTS qualifying record with a lap of 29.274 seconds at 184.464 mph.

Cody Coughlin and the No. 05 Athenian Motorsports team will be using truck No. 104. This chassis was most recently used by John Wes Townley at Pocono Raceway in August.  Townley finished 29th after being caught up in an early race crash.

First year crew chief Jimmy Villeneuve will be atop the pit box for Coughlin on Friday night.  Villeneuve hails from the Granite State of New Hampshire where he spent many years working on Super Late Models and Super Modifieds.  Villeneuve has been in the NASCAR Camping World Truck Series garage for quite a few years and has worked with teams such as Kevin Harvick Incorporated and Turner Motorsports.

In July 2014, Athenian Motorsports began operating out of a new, state-of-the-art, 43,000 square foot facility in Concord, N.C. In 2016, the team is fielding full-time entries in the NASCAR Camping World Truck Series and ARCA Racing Series presented by Menards. AMS also has a part-time entry in the NASCAR Xfinity Series.