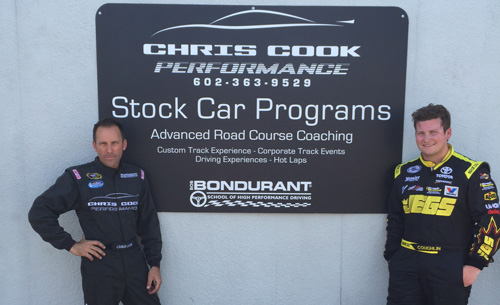 Cody Coughlin will make his first road course start this Sunday, May 24th in the ARCA 150 at New Jersey Motorsports Park in Millville, New Jersey.  The Joe Gibbs Racing Development driver will be his third start this season in the ARCA Racing Series driving the #55 JEGS.com Toyota Camry prepared by Venturini Motorsports.

Coughlin will make his first laps around New Jersey Motorsports Park on Saturday, May 23rd with a one-hour practice session from 10:55 – 11:55am.  The final practice is scheduled from 12:55pm – 2:25pm.  Qualifying is scheduled for 4:15pm.

On Sunday, May 24th, fans will get a chance to meet the Joe Gibbs Racing Development driver during an autograph session from 12:30 – 1:15pm Eastern Time.  The green flag for the ARCA 150 will wave at 1:30pm.

The Joe Gibbs Racing Development driver climbed behind the wheel of his JEGS.com Super Late Model this past Saturday to compete in the ARCA/CRA Super Series powered by JEGS Berlin 125.  After a tough qualifying run, the team pulled his car out of impound to work on a better setup for the race.  Coughlin would have to start 23rd in the event.  The gamble to pull the car out of impound paid off as he went forward all race and ended with an impressive fifth place finish.

Consistency in the ARCA Racing Series

The 19-year-old will be coming into the ARCA 150 at New Jersey Motorsports Park with four straight top-five finishes.  This consists of three fourth place finishes and a second place finish in his last start at Talladega Superspeedway in Alabama.  Coughlin also won his first ARCA pole at Talladega driving the #55 Toyota Camry prepared by Venturini Motorsports and sponsored by JEGS.com and Sport Clips.

Getting Prepared for Road Course Debut

The Delaware, Ohio native recently made a trip to Arizona to get ready for his road course debut.  He went to the Bondurant/Chris Cook Performance Stock Cars School in Chandler, Arizona.  Coughlin received one-on-one coaching on how to lead and follow cars around along with open track sessions.

Cody Coughlin was recently asked what his all-time favorite television show was, and it may be a surprise when he says “Miami Vice.”   Yes, the popular showed that aired prior to his birth is at the top of his chart.  Coughlin has said that he has seen every episode of each season.  Asked why he likes the show, he simply said, “Just the style of it.”