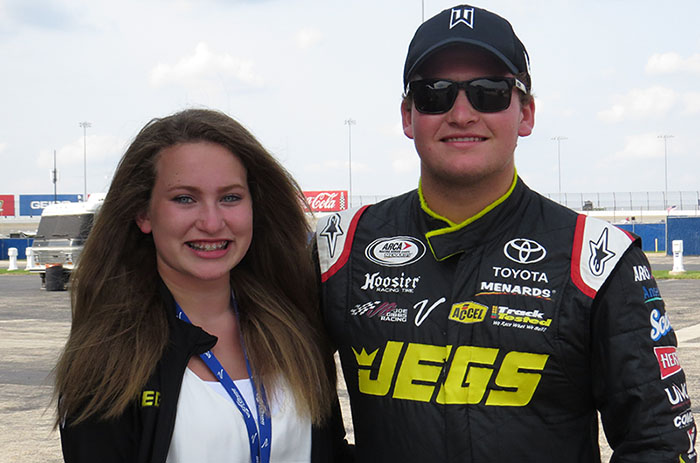 High Five's All Around:
Eighteen-year-old Joe Gibbs Racing Development Driver Cody Coughlin enters the SCOTT Get Geared Up 200 presented by Federated Car Care on Friday, July 25 with momentum on his side.  As he returns to his short track racing roots in the ARCA Racing Series presented by Menards event at Indianapolis' Lucas Oil Raceway, Coughlin and the JEGS.com No. 55 crew at Venturini Motorsports has the high spirits of a fifth-place finish in their most recent race, the July 19 ARCA event at Chicagoland Speedway.  Coughlin's strong run was his first ARCA top-five finish and gave him five ARCA top10- finishes in his first seven series starts.
Making Laps in the Circle City:
While the SCOTT Get Geared Up 200 will be Coughlin's first ARCA race at the historic Lucas Oil Raceway in Indianapolis, it won't be his first laps at the track.  Coughlin led 55 of the 100 laps in the JEGS/CRA All-Stars Tour race at the track in 2011 before finishing eighth in a run that helped him clinch the series' Rookie of the Year title that season.  He also finished sixth and 12th in his two races at LOR in 2013, his championship season in the JEGS/CRA All-Stars Tour.
In addition to his stock car experience at Lucas Oil, the Coughlin name has seen plenty of success on the facility's drag strip.  Cody's uncle, Jeg Coughlin, Jr., is a three-time Pro Stock champion of the prestigious NHRA U.S. Nationals in Indianapolis.
Luck With Leiner:
The SCOTT Get Geared Up 200 will be Coughlin's third ARCA race working with veteran crew chief Dave Leiner atop the No. 55's pit box.  Leiner has been a longtime crew chief in NASCAR and ARCA and has given Coughlin a big confidence boost since he came on board last month.  In the two races that Coughlin and Leiner have worked together, the No. 55 has finished seventh at Winchester (IN) and fifth at Chicagoland last week.
Hangin' With The Hulk:
After finishing fifth at Chicagoland, Coughlin, his mom Di and sister Kennedi had the opportunity to meet and chat with award-winning actor Mark Ruffalo at Chicagoland Speedway.  Coughlin and Ruffalo chatted at length about his run on the track, while the ladies of the Coughlin family had the opportunity to chat with the actor about their favorite films he has been in.  Among the roles that Cody considered his favorite was Ruffalo's portrayal of "The Hulk" in "The Avengers," while the ladies were excited to chat with Ruffalo about "13 Going on 30" and "Rumor Has It…"
Follow Cody:
Cody Coughlin on Twitter: @Cody_Coughlin
Team JEGS on Twitter: @TeamJEGS
Joe Gibbs Racing on Twitter: @JoeGibbsRacing
Venturini Motorsports on Twitter: @VenturiniMotor