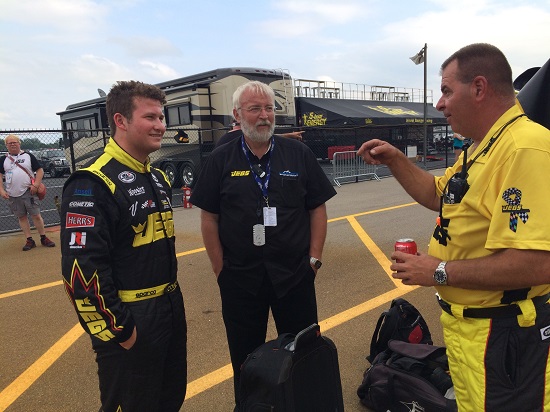 Nineteen-year-old Joe Gibbs Racing Development Driver Cody Coughlin scored his first career ARCA Racing Series top-five finish in the Chicagoland Speedway event in July of 2014.  Coughlin set fast time in practice for last year's race, qualified fifth and was a contender for the win throughout the race.  He had a shot at the win during a final 10-lap sprint to the finish, but at the fall of the checkered flag, his new-tire charge to the front ran out of laps as he ended the race in fifth.

In Search of Victory
The last thing on Cody Coughlin's ARCA checklist that needs a mark next to it is a first career victory.  In 16 career events, Coughlin has been atop the board in practice.  He's won an ARCA pole award.  He's finished second and in other positions in the top-five on five different occasions in his young career.  He's also finished in the top-10 in almost 70-percent of his ARCA starts.  This weekend, he and the crew on the Venturini Motorsports-prepared JEGS.com No. 55 Toyota Camry are focused solely on notching that first career "W" in Chicagoland.

Dad's Day
Family is one of the most important aspects of Cody Coughlin's life.  His dad (John), mom (Di) and sister (Kennedi) support him at each of his races.  While Coughlin hopes to win every time he straps on his helmet, winning the SCOTT 150 at Chicagoland this weekend would be even more special because the race takes place on Father's Day weekend.  John Coughlin is a five-time NHRA National event winning drag racing driver who has put his racing career in the back seat to focus on his role as the co-owner of JEGS and on his efforts to see his children succeed in their chosen paths.

Ride Along with Cody
Cody Coughlin's No. 55 JEGS.com Toyota Camry will carry on-board cameras during the live FOX Sports 2 broadcast of the SCOTT 150.  Fans will be able to see the same view Coughlin does from behind the wheel and all around his ride Saturday.  Coughlin enjoys having fans be able to ride alongside him during each ARCA race through their televisions and hopes to give his supporters an up-close view of victory lane at Chicagoland.

@Cody_Coughlin
Social media is becoming more and more popular each day. Cody Coughlin is also jumping on board with his own Twitter account. Fans are encouraged to follow his Twitter account @Cody_Coughlin.  On race days, the account will be updated to give you a little insight as to what is happening behind the wheel and with his race team. Plus it’s a great opportunity to see what he enjoys doing away from the track.