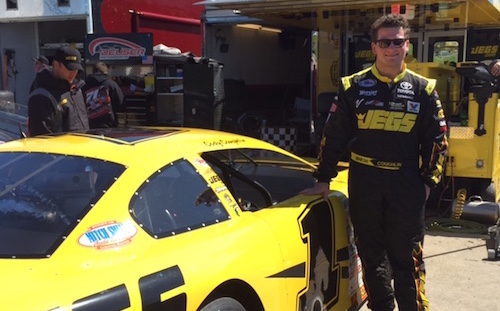 Cody Coughlin will be making his third start in the ARCA/CRA Super Series powered by JEGS this Saturday, May 16th at Berlin Raceway in Marne, Michigan.

The Joe Gibbs Racing Development driver will be on track starting at 3pm ET on Saturday with a one-hour practice session.  Qualifying will start at 5pm.  Fans will get an opportunity to meet Cody during an on-track autograph session at 5:30pm.  Racing starts at 6:30pm with the Berlin 125 capping off the night of racing action.

The Joe Gibbs Racing Development Driver recently made his second start of the year in the ARCA Racing Series at Talladega Superspeedway on Friday, May 1st.  He impressed many when he earned his first pole in the series and went on to lead 11 of the 79 laps to finish second in the 200-mile event while driving a Toyota Camry prepared by Venturini Motorsports with sponsorship from JEGS and SportClips.

The 19-year-old will be making his third start in the ARCA/CRA Super Series Powered by JEGS.  He has one top-10 finish in the first two starts and currently sits eighth in points.

Eager for a Strong Run at Berlin

Cody Coughlin will be making his third career start at Berlin Raceway this Saturday night.  It will be his first start in a Super Late Model at the 7/16-mile oval.  His previous two starts came in the JEGS/CRA All-Stars Tour in 2011 and 2013. Cody claims the layout of Berlin Raceway is challenging to get the right setup in the car.  This will be a great test for himself and his Team JEGS crew.

Cody Coughlin has had an opportunity to compete on a variety of racetracks in his young career already.  When he was asked which short track he would like to race at, he was quick with his answer, Slinger Super Speedway in Slinger, Wisconsin.  He went on to say what drew his attention to the quarter-mile track, located near Milwaukee, Wisconsin. It was the fast speed and high banking in the corners.  But, the stories he has heard from his spotter Scott Wimmer has increased his curiosity to race there and hopes to soon.