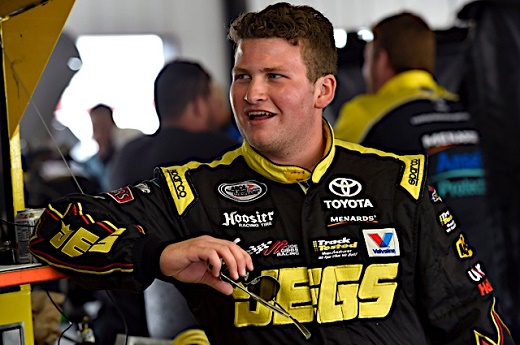 When the 2013 JEGS/CRA All-Stars Tour champion heads back to a race, people take notice.  It's been a while since Cody Coughlin has run a JEGS All Stars Tour race, but he's back for the first time this year.  Coughlin ran just two races in this series in 2014, scoring top-ten finishes in both.  A fourth-place run at Columbus Motor Speedway was his best of the two events.

The winner of the Mercy Masters of the Pros 144 receives a beautiful green jacket, just like the champion of The Masters at Augusta National in Georgia.  Coughlin, an avid golfer, would love to score himself one of those jackets.

“That would be awesome to win the green jacket,” exclaimed Coughlin.  “I really enjoy golfing during my downtime and Augusta National Golf Course (home of The Masters) is one course I hope to play someday.  To win something like that in an auto race, and be part of a small group of drivers to win it, would be incredible.”

Coughlin flew from his home state of Ohio down to North Carolina for pit stop practice this past Tuesday. He participated in practice with both Joe Gibbs Racing and Michael Waltrip Racing throughout the day.  He drove a Sprint Cup car at JGR and a Truck at MWR.  Coughlin was thrilled by the end of the day as he felt he learned a lot that will help him out as he prepares for his debut in the NASCAR Camping World Truck Series.

The Mercy Masters of the Pros 144 was originally scheduled to be run on May 30, but it was rained out.  That's not the only time that has happened to Coughlin this year.  He was fast in practice this past Saturday at his home track of Columbus Motor Speedway before the ARCA/CRA Super Series Bud St. Amant Memorial 125 was rained out.  Hopefully that won't happen this weekend as Coughlin pursues a win at Lebanon I-44 Speedway.