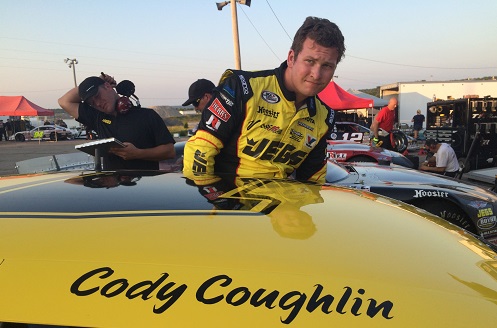 Cody Coughlin has made 17 starts in the ARCA Racing Series between 2014 and 2015.  In those 17 starts he's proven he can contend for wins at any race track the series visits.  Coughlin has scored five top-five finishes, 11 top-10 finishes and two pole awards.  Both of those pole awards have come this year, at Talladega Superspeedway and Chicagoland Speedway.  Coughlin had a streak of six straight top-10 finishes snapped at Pocono Raceway earlier this season.  The Joe Gibbs Development driver has scored top-10 finishes in more than 60-percent of his ARCA starts.

The Kentucky Speedway is a mile-and-a-half tri-oval in Sparta, Kentucky.  It has 14-degrees of banking in the corners with 10-degrees on the tri-oval portion of the front-stretch.  The track is notorious for its incredibly rough racing surface.  Drivers and teams know that the key to success at Kentucky is getting your car to handle well over the bumps.

The last time Cody Coughlin raced at Kentucky Speedway was in September of 2014 for the ARCA Racing Series ZLOOP 150.  It was his first race at Kentucky.  Coughlin started sixth in his no. 55 Venturini Motorsports JEGS Toyota Camry and finished even better when he took the checkered flag in fourth.  His fourth-place run was the second of six straight top-10 finishes.

Those are the lyrics to Kip Moore's hit 2012 song, "Somethin' 'Bout A Truck" and Cody Coughlin can certainly agree that there's just something about a truck.  He's set to go truckin' this Thursday night at Kentucky Motor Speedway, which will be his NASCAR debut in the Camping World Truck Series.  The Delaware, Ohio native will pilot the 25-truck for Venturini Motorsports.