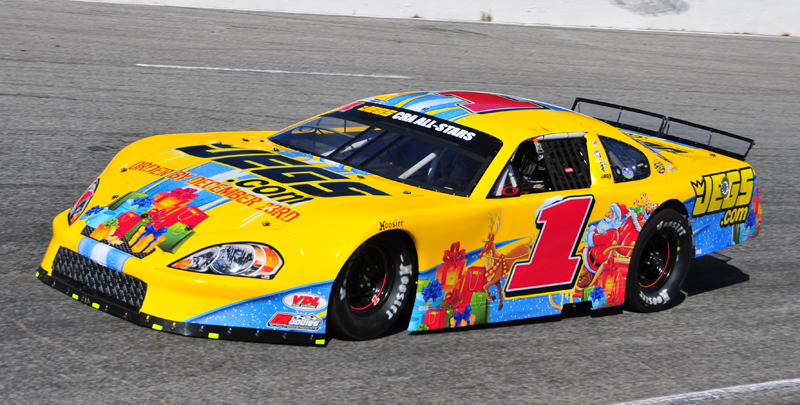 The Snowball Derby weekend, which includes the Snowflake 100 Pro Late Model race, is the most prestigious asphalt Late Model racing event in the country.  Nearly 200 Late Model teams from throughout North America will try to etch their name into the history books at Pensacola, Florida’s Five Flags Speedway as a Snowball Weekend winner.

With some experience at Five Flags in the Snowflake 100 event and with some momentum on his side, Cody Coughlin has his sights set on becoming the next Snowflake 100 winner when he takes the green flag in Pensacola on Saturday, December 1.

“If you’re going to win one race all year, you want to win the Snowflake 100,” said Coughlin, 16.  That race weekend is such a big deal and there’s so much attention on Pensacola that weekend.  You definitely want to have your name on the list of drivers that have won down on Snowball weekend and I think we’ll have a good shot with our JEGS.com No. 1 Chevy.”

Coughlin enters the Snowflake 100 on December 2 with a momentum-building run in the Governor’s Cup 100 Pro Late Model race at New Smyrna Speedway (FL) earlier in November.  Coughlin set fast time for that race and was patiently running in the top five before bad luck resulted in two incidents.  Still the JEGS No. 1 ride was strong enough to fight back through the field in the closing laps for a fifth-place finish, which has the entire Team JEGS operation entering Pensacola with their heads held high.

“Bubba (Pollard, Coughlin’s crew chief and driver coach) and Kevin (Hamlin, team manager) have done a great job with the car in the shop.  We made some good gains at New Smyrna.  We didn’t have the best luck, but we raced well and the car was good there for all 100 laps.

“I look forward to having the support of my family and the team, plus my spotter Scott (Wimmer) with me down in Pensacola to keep building on that momentum we started to roll with at New Smyrna.

Five Flags Speedway is a notoriously fast racetrack.  With wide, high-banked corners, Five Flags is the kind of track where a driver like Coughlin can let his gas pedal foot do the talking.

“I enjoy those fast racetracks.  It just seems to feel more natural to me.  On those bigger tracks, you can just go out there and race, which seems to suit my driving style more so than those little bullrings where you have to beat and bang.”

Coughlin finished a strong 11th in his debut in the Snowflake 100 in 2011.  That race saw more than 60 drivers attempt to make the 35-car starting field.  While this year’s Snowflake event has just as strong of a field, Coughlin knows what he needs to do to find success once again in Pensacola.

“While I did want to win the race last year, I was definitely more concerned with just qualifying for the race.  There’s 70 late models that go for 30 spots.  That’s a lot of pressure.  You have to put a lot of emphasis on qualifying, but I try not to think too much about it until qualifying comes.  There’s no reason to worry about it during practice.  You just have to stay focused, keep working on your car and keep your faith in the Lord.  If you do those things, you shouldn’t have to worry about qualifying.”