Cody Coughlin Pumped Up to Make ARCA Debut at Mobile 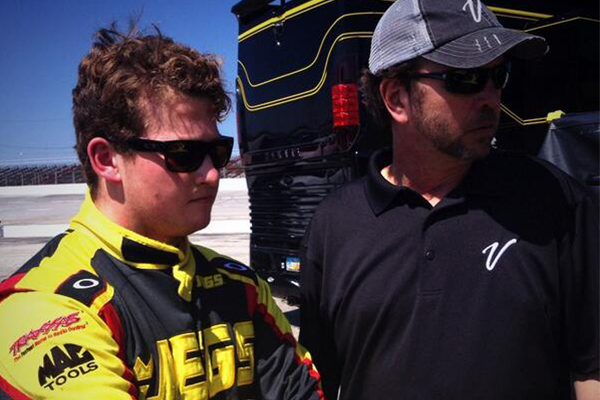 After months of planning and preparation, Cody Coughlin finally gets to do what he's been getting pumped up to do since he announced his move to the ARCA Racing Series.  The 18-year-old Joe Gibbs Racing driver gets to fire up his JEGS.com-sponsored No. 55 Toyota for Venturini Motorsports for his ARCA debut in the ARCA Mobile 200 on March 22.

Coughlin, the 2013 JEGS/CRA All-Stars Tour Late Model Champion has two recent tests under his belt and is ready to put his preparation into action on the fast half-mile Mobile International Speedway in Irvington, Alabama.

"I'm really excited for this weekend," said Coughlin.  "Venturini Motorsports has a really strong team and with the support of Joe Gibbs Racing, I've been blessed with some of the best people behind me I could ask for.  That makes me confident that when I get behind the wheel, I've got the best car I can possibly have to go out there and compete.  I don't expect anything less than a good performance for myself and my team.

"I know it might take me a race or two before I'm able to compete for a win, but that won't stop me from going out there this weekend with hopes of picking up that win."

Coughlin recently tested at the Mobile International Speedway half-mile with his Venturini Motorsports teammates.  He had already shaken down his No. 55 machine in his first ARCA test at Virginia's Motor Mile Speedway earlier in March, but being able to work with crew chief Jeff McClure and the rest of the Venturini team in a race setting has made Coughlin even more excited for Mobile.

"The teammate thing is pretty new to me because that's something I've never had in my Late Model days, but it's been a really cool experience.  It was a cool being a part of seeing everyone work together and gel at the Mobile test last week.  It was a very positive experience.  I look forward to bouncing ideas off of my teammates John Wes Townley, Justin Boston and Michael Self this weekend.

"The support I've gotten from the entire team at Venturini Motorsports and Joe Gibbs Racing has been awesome, just like the support I get from my family.  I can't thank my mom (Di), dad (John) and sister (Kennedi) enough for their support as we get ready for my ARCA debut.  They've been with me every step of the way and I can't wait to have them cheering me on in Mobile."

Before he can flip the switch and compete for the race's staple award, a classic jukebox that is presented to the race winner, Coughlin will meet the Mobile area fans during an always-popular driver autograph session on Thursday, March 20 from 5-6pm CT inside the Aircraft Pavilion at the USS Alabama Battleship Memorial Park in Mobile.

"One thing that I've always been real comfortable with is interacting with the fans.  I'm excited to meet some new fans in Mobile.  Being able to do it on a historic battleship like the USS Alabama is a special experience too.  I'm really looking forward to that."

On-track action for Coughlin at the ARCA Mobile 200 kicks off on Friday, March 21 with first ARCA Racing Series practice from 2:30pm to 3:15pm CT.  Final practice is from 4:15pm to 5:00pm.  Menards Pole Qualifying presented by Ansell kicks off at 7:00pm.