Cody Coughlin Rallies Back for Solid Finish in Snowflake 100 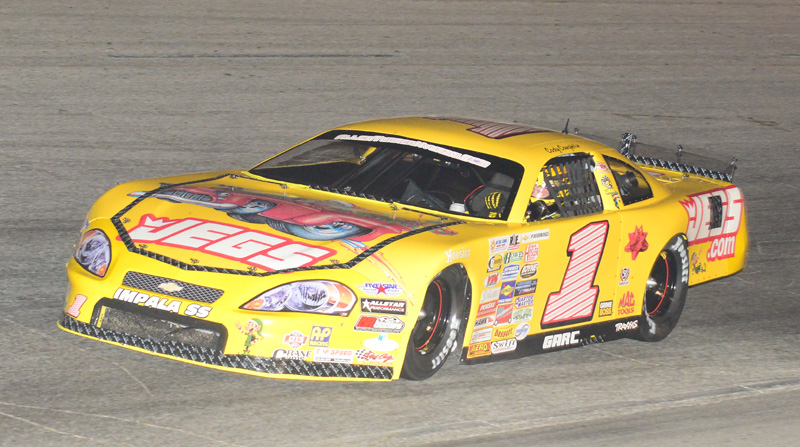 In order to score a strong finish in the Allen Turner Hyundai Snowflake 100 at Pensacola, Florida’s Five Flags Speedway on December 1, 16-year-old Cody Coughlin had to overcome several hurdles that nearly spelled doom for the JEGS No. 1 Chevy Pro Late Model.  Still, Coughlin showed the patience and determination of a veteran driver by rallying late in the star-studded Pro Late Model Snowball Derby preliminary event for a solid 11th-place result.

“We were able to fight through a loose racecar and a spin to get up close to the front at the checkered flag,” said Coughlin.  “We thought we had a good top-five car all weekend long and it showed in practice earlier in the week.  When the green flag flew, the car was really loose and it was a handful.  Even when we spun around halfway, Kevin (Hamlin, team manager), Bubba (Pollard, crew chief), Scott (Wimmer, spotter) and the guys on the JEGS crew did a good job of keeping me motivated to get a good finish at the end.  We had some unfortunate things happen through the course of the race, but we fought through it all and finished the year off with a decent finish that we can build from for 2013.

“I know we’re capable of winning the Snowflake race.  I know there was a lot of stiff competition, but I also know that we have a good enough team and I’ve matured enough as a driver to win it.  Hopefully with a few better breaks next year, we’ll be standing in victory lane.”

Coughlin started the Snowflake 100 from the 16th position and was quickly marching his way forward with the JEGS No. 1.  He got to the door of the top-10 before the handling on his racecar began to fade.  He still fought through the loose condition and stayed in the top-15.  A spin while racing with a pack of other competitors dropped him in the running order with less than 10 laps to go and forced him to make a short sprint back to the front of the field.

“We put a lot of hard work into our racecar this weekend but sometimes things don’t go your way in the race.  That was the case with the loose condition and the spin.  We were running with some drivers deep in the field and whenever that happens, bad luck can strike.  Thankfully nobody on this JEGS team gave up and we battled back to get some spots back at the end of the race.”

“We had a pretty good year with this JEGS No. 1 Chevy team,” added Coughlin.  “All the guys, my mom, my dad, my sister and all of our supporters gave me a ton of support all season long.  I wanted to get them in victory lane this season, but we’ll do a lot of homework and hard work over the winter to make 2013 an even better season.”