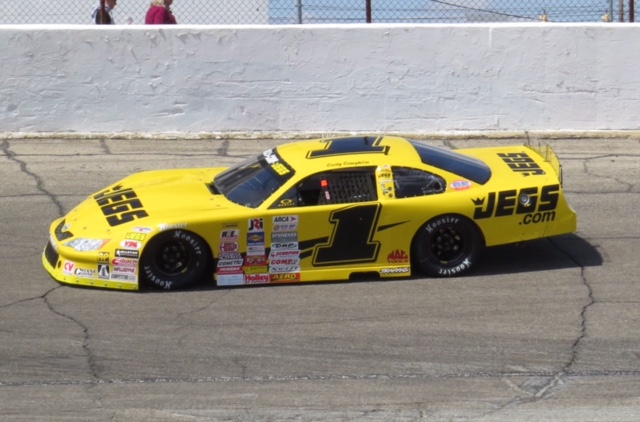 After recording his best finish in his ARCA Racing Series career, Cody Coughlin and the Team JEGS crew will head to Berlin Raceway in Marne, MI this Saturday to compete in the ARCA/CRA Super Series Berlin 125 Super Late Model event.

This will be the third start in the ARCA/CRA Super Series this season for the Joe Gibbs Development driver and admittedly, the team is heading to a track that has been challenging to them in the past.

“We have competed at Berlin Raceway twice and we didn’t have satisfying finishes,” recalled Coughlin.  “We decided to head up there honestly because it is a challenge for us to overcome.  We are looking forward to putting that behind us with a strong finish and possibly get a win.”

Coughlin has competed twice at Berlin Raceway in the JEGS/CRA All-Stars Tour in 2011 & 2013.  This will be the first time he will compete at the 7/16-mile oval with a Super Late Model.

The race will be a good test for the Team JEGS crew that consists of Kevin Hamlin (Team Manager), Nick Easton (Crew Chief), Scott Wimmer (Spotter) and Dave Holt (crewmember).

“Typically, we can go to a track with notes that we can rely on to get a good setup,” explained Coughlin. “I did get a chance to talk to Kyle Busch about what kind of driving style it takes to get around there and I think it will help us a lot.  I have a talented crew that will get a good setup in the car and we will be competitive on Saturday night.”

Coughlin will be coming to Berlin Raceway fresh off his strong run in the ARCA Racing Series event at Talladega Superspeedway.  The 19 year-old finished second after getting his first career pole in the series.

“It was great to get back in the ARCA Racing Series car prepared by Venturini Motorsports and have a great day like we did at Talladega for Sport Clips,” Coughlin said.  “It would be great to continue the momentum in our Super Late Model this weekend at Berlin Raceway.”

Along with the Team JEGS crew, his family, including his parents, John & Di, and his sister Kennedi will make the trek to the Grand Rapids-area track in support of Cody.

“The one thing that is great about going to the tracks is that my family is always there,” exclaimed Coughlin.  “They keep encouraging me and their positive attitudes keep us all trying harder.

“God has truly blessed everyone that supports our racing success.  Each person brings their God-given abilities to the team and we are having success because of each of our efforts we show each race.”

Cody will be on track starting at 3pm ET on Saturday with a one-hour practice session.  Qualifying will start at 5pm.  Fans will get an opportunity to meet Cody during an on-track autograph session at 5:30pm.  Racing starts at 6:30pm with the Berlin 125 capping off the night of racing action.