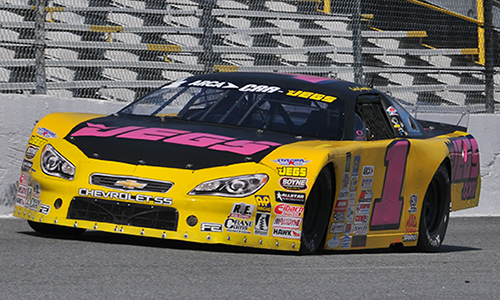 Cody Coughlin and his Team JEGS crew are having a busy week after competing his past weekend at the 48th Annual JEGS Governor’s Cup 200 at New Smyrna Speedway in New Smyrna, Florida.

Cody and his team competed in the 100-lap Pro Late Model event this past Friday night where they captured a fifth place finish after starting 12th.

On Saturday, the team competed in the JEGS Governor’s Cup 200 and were having a solid top-10 run until a late-race incident relegated him to a 20th place finish.

“Our main goal for the season was to win the JEGS/CRA All-Stars Tour championship, which we accomplished. Now we are starting to focus on our Super Late Model program in 2014,” Coughlin said. “We are working on some different setup ideas but most of all gaining more seat time. We still feel we can be competitive to win, but getting top-five and top-10 finishes in these big races is a huge accomplishment for this team.”

Coughlin and his team have had a great year achieving the goals they set each time they show up at a track.

“It has been an amazing year for our team,” Coughlin exclaimed. “We achieved all of our goals that we set prior to the start of the season. We won the JEGS/CRA All-Stars Tour championship, won three races so far and got a top-ten finish in our first long race by finishing seventh in the Winchester 400. Let’s see what we can do next!”

“Last weekend, we stayed focused on finding the best setup in our car,” Coughlin said. “The track conditions surprisingly changed which caused us to change what we thought were best for the car. I am proud of my crew for staying patient and working together.”

The team is now getting ready to return to the Fairgrounds Speedway Nashville (TN) for this weekend’s 29th Annual All American 400. Cody will be running his Super Late Model this weekend. Back in April, he competed at the famous track in his Pro Late Model where he was the fast qualifier and finished third.

“Our goal is to go and gain some more experience with our Super Late Model and finish the race,” Coughlin said. “We feel that we are improving with our program and we hope to get a top-five and if things go right, it would be fun to contend for a win.

“Nashville is a cool, fast track that is fun to race on. We raced there earlier this year at the famous track and got to race alongside former Daytona 500 champion Sterling Marlin. That was a memorable experience.”

Cody continues to have the great support of his family and fans at each event.  His parents, John and Di, and his sister Kennedi are his biggest cheerleaders.

“My family does a great job of keeping my feet planted to the ground and remind me that racing is supposed to be fun,” Coughlin said. “I, like many other drivers, are blessed to have my family’s support each weekend.

“I also thank God for keeping everyone safe at each event. This sport is a risky sport, but he makes sure his angels are watching over us all the time.”