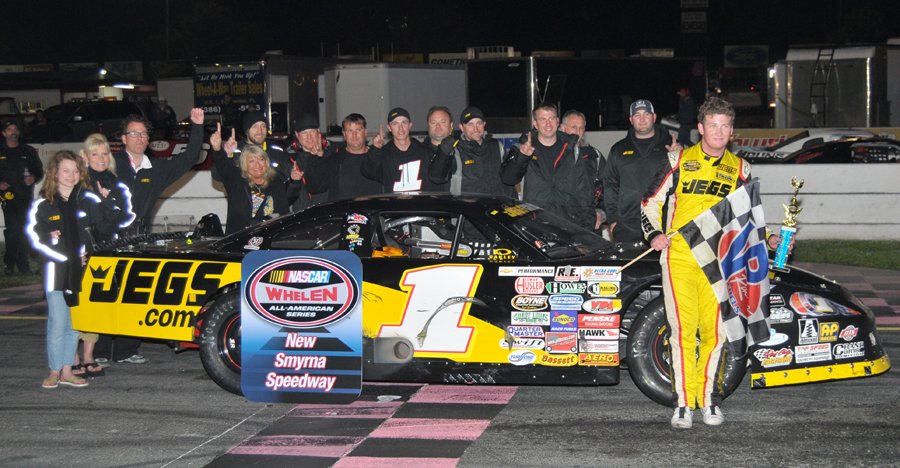 For the racing world, the aura surrounding Florida Speedweeks each year is like no other.  Racers around the world converge on the east coast of Florida to do battle on the dirt, asphalt and the high-banks of Daytona Int’l Speedway.  To win at such a prestigious time puts your name beside sports greats such Richard Petty, Richie Evans and Dick Trickle.  But, to win your first race makes it that much more special.

That’s exactly what Cody Coughlin has accomplished.  The 17 year-old put his Team JEGS Pro Late Model in victory lane Friday during opening night of the World Series of Asphalt Stock Car Racing at New Smyrna Speedway, just down the road from Daytona Int’l.

“I feel so blessed.  This is such an accomplishment, especially to get my first Late Model win during Florida Speedweeks,” said Coughlin.  “To make it even more special, many of my extended family were with me and not just my mom, dad and sister Kennedi.  I am so proud to have my Paps (Ron Davis), who just turned 80, here with me.  He has traveled all across the country to watch me race for three years now and it was special having him here for my first win.  He loves watching me race and I love having him with us at the track.

“My Aunt Debbie and cousin and honorary crew member Brian Taylor were here with us as well.  My entire family has done so much for me; I have to thank them all, especially Pappy (Jeg Coughlin Sr. – founder of JEGS); I wouldn’t be able to do any of this if he didn’t have the vision for our family so many years ago.”

Coughlin’s night was near picture perfect.  He set fast time in qualifying in the JEGS Chevrolet Number-1.  The only blemish was picking a pill for an inversion of ten after time trials.  After starting 10th, Coughlin methodically picked his way to the front and with just a handful of laps to go, and a strong move, he moved to the lead.  The teenager then held off Earl Paules from Pennsylvania to capture his first-career Late Model victory.

“It was a hard fought battle,” Coughlin stated.  “We tried to be patient and at the end it was time to go.  We had a great battle for the lead and it’s an amazing feeling to pull into victory lane.

"I love these guys on this team and it's such an honor to be here in victory lane," added the Ohio native.  “We started pretty deep and this was such a short race (35-laps) that we knew we had to be patient, but we had to be aggressive too and here we are."

Coughlin is being tutored this year by a wide-array of talented people and he says that is part of the key to the success already this year.

“Kevin (Hamlin, team manager), Chad (Wood, crew chief), Freddie (Query, chassis builder and consultant), Bubba (Pollard, driver coach) and Scott (Wimmer, spotter) have helped me tremendously. I feel so lucky to have them and my faith on my side.”

The 47th Annual World Series of Asphalt Stock Car Racing continues Saturday through February 23rd.  The eight features in nine nights include seven 35-lap features for the Pro Late Model division, plus the extra-distance 100-lapper on February 21.  Live coverage of all events will be on Speed51.com.