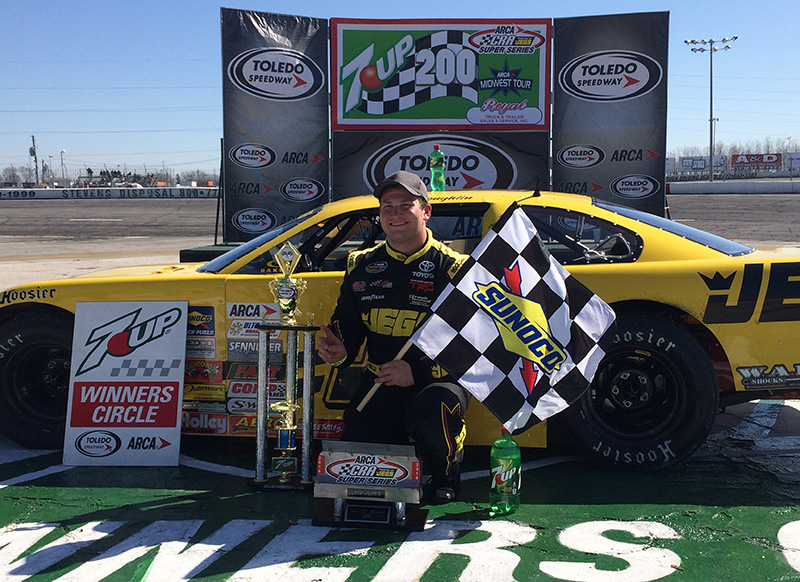 Cody Coughlin returned home to Ohio and returned to victory lane in the same day.  The Joe Gibbs Racing Development Driver started third in the 7-Up 100 Saturday for the ARCA / CRA Super Series at Toledo Speedway and won the race in convincing fashion while driving the Team JEGS No. 1 Toyota Camry.

“This feels great, especially because we struggled at the beginning of the year,” said the 20 year-old Coughlin.  “We made a change and brought Jack (Smith) in to be the crew chief.  He and Kevin Hamlin have really clicked so well.  They gave me a great race car and that makes my job easier for sure.”

Coughlin did his job to the best of his abilities Saturday afternoon.  He fell back to fourth in the early stages of the race, but he stayed patient.  The Delaware, Ohio native worked his way back into third and then set his sights on the top-two drivers.

When the leaders encountered lapped traffic, Coughlin pounced.  He made an aggressive three-wide move in turn four to take over second place.

“You have to be careful on your tires at this place,” explained Coughlin, who is also racing part-time for Kyle Busch Motorsports in the NASCAR Camping World Truck Series.  “When you do get an opportunity to take a spot, you have to take it and that’s what I did with that aggressive move.”

Coughlin took the lead off of turn two with 35 laps to go and started to drive away until a crash brought out the red flag with about 28 laps to go.

After the lengthy cleanup, Coughlin was able to drive away from the field on the restart to claim the checkered flag at Toledo in just his second race with his new crew chief.

“We’ve been friends for a long time so I knew that we would click quickly,” Coughlin said.  “I didn’t know if we’d necessarily have the speed, but we have both the speed and the friendship and that is really great.”

This is Coughlin’s first victory since he won the 100-lap Labor Day ARCA / CRA Super Series (Super Late Model) race at the famed Winchester Speedway in Indiana during the 2014 season.

Coughlin believes he has more wins coming.  For that reason, he’s leaving Toledo Speedway with a smile on his face that no one can wipe off.

“I couldn’t be happier with this JEGS Toyota Camry,” Coughlin said.  “I’ve really got to thank Jack Smith for coming on board and giving me a great race car, as well as all of my guys, Kevin Hamlin (team manager), Scott (Wimmer, spotter) and Dave (crew-member).  We’ve all worked so hard and I’m blessed to have the Lord on my side to provide me with this opportunity.  My parents (Di and John), as well as my sister Kennedi are my biggest cheerleaders, and I can’t thank them enough for their endless support.  I’m so glad that they were here with me today to join in this celebration.”

Cody Coughlin’s next race is on May 6 at Kansas Speedway in his Kyle Busch Motorsports No. 51 Toyota Tundra for the NASCAR Camping World Truck Series.  Coughlin’s next Super Late Model race is the following day, on May 7, at Anderson Speedway in Indiana.