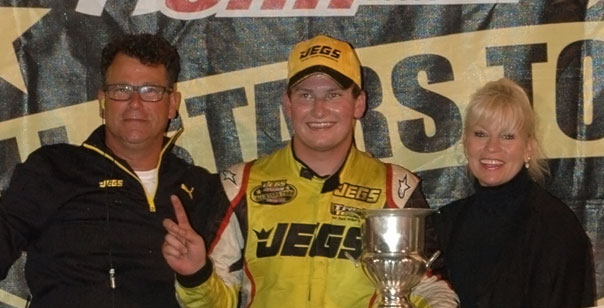 One of the more popular hats being worn at short tracks today is the bright yellow JEGS hat.  On Saturday at Salem Speedway in Salem, Indiana, many would have thrown their hats on to the track in the same honor as a player getting a hat trick in hockey as Cody Coughlin picked up his third win in 2013.

Coughlin and his Team JEGS crew celebrated their second win in the last three starts in the JEGS/CRA All-Stars Tour with a spirited team effort victory. Overall, the Salem win was his third of 2013.

“We came from the back and we won, this is awesome,” a smiling Coughlin said in victory lane. “I just can’t give my Team JEGS crew enough credit.

“Praise the Lord for giving us a great car and team.  I am going to go home and do some celebrating.”

Coughlin's whole team celebrated after overcoming some adversity during qualifying.  Coughlin led the first practice session and was in the top five in the second. But when it came time to qualify, he qualified 14th.  The reason being a broken spindle was discovered after his qualifying run.

“It didn’t feel bad, just really slow going down the straightaways,” Coughlin recalled. “I knew something was broken, but we overcame it and here we are in victory lane.”

Coughlin knew he had a fast car and didn’t waste time working his way to the front. By lap 28, he was up to sixth.

On a restart on lap 55, Coughlin started behind leader Tom Woodin and the two took off from the rest of the field when the green flag waived in the air.  Coughlin tried more than a half a dozen times to get by Woodin, which kept the fans on the edge of their seats.

With nine laps to go, Coughlin got a strong run to the inside of Woodin coming off of turn two.  Coughlin was able to complete the pass in turns three and four and come down to a cheering crowd on the front stretch to lead his first lap of the event.

“Woodin drove a great race,” Coughlin said. “He was tough to pass. We got up to his door going down the backstretch and made it work.”

Coughlin drove to a jubilant crew and parents, John and Di, in victory lane, as this truly was a team win.

“Freddie Query (Consultant) is in North Carolina tonight celebrating his anniversary and couldn’t make it to the track. But he was on the phone with Nick Easton (Crew Chief) all day.

“Nick, Kevin Hamlin, Scott Wimmer, Dave Holt, Jeremy Wilburt and Tony Collier have given me such great insight and altogether we have a winning combination.”

“I also want to thank my parents John and Di for their loving support and being awesome cheerleaders for me,” Coughlin said. “Also a big thanks to my sister Kennedi who couldn’t make this trip.  I know she was watching on Speed51.com and was jumping up and down.”

Coughlin now is the overall point leader in the JEGS/CRA All-Stars Tour.

“I said last week that we are going to win this championship and this win tonight can affirm my belief that we will.”

Coughlin will be looking to extend his point lead on Friday, July 19 when the JEGS/CRA All-Stars Tour will visit the high-banked quarter-mile Anderson Speedway in Anderson, IN.