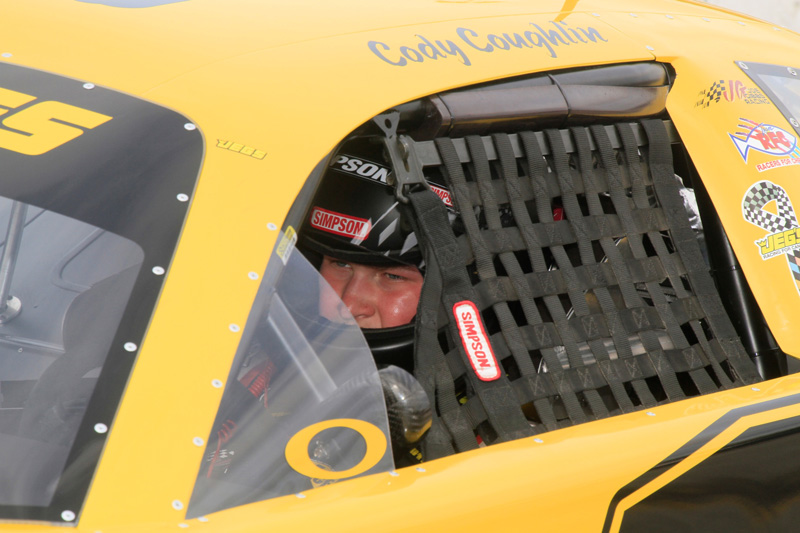 Cody Coughlin has had a strong 2014 filled with triumphs and top finishes in a wide-array of stock car races.  He made his debut in the ARCA Racing Series, captured his first Super Late Model victory at the famed Winchester Speedway (IN) and scored top-five finishes in ARCA as a first-year development driver for Joe Gibbs Racing.

This weekend Coughlin returned to the site of his first Late Model victory, New Smyrna Speedway (FL), in search of another trophy.  A strong run, from 15th starting spot to fifth, was stopped by transmission issues at lap 134 of the 49th annual Governor’s Cup 200-lap contest.

“It’s disappointing to have the mechanical issue because we definitely had a top-three car,” Coughlin said after the race.  “There is no doubt about it; we were fast and moving our way to the front.  We just ran into some bad luck, but this team always perseveres and I’m looking forward to out next race.”

“My guys really worked hard to get us back out there,” Coughlin said.  “During one of the cautions, my shifter broke, but thankfully I had it in high gear on the restart and we were still able to gain a few positions after the break.  I’ve seen it happen to Dale Earnhardt Jr. (NASCAR Sprint Cup Series) and Ryan Blaney (NASCAR Camping World Truck Series) lately, so I know it’s just one of those things that unfortunately happens.

“Kevin (Hamlin, Team Manager), Nick (Easton, Crew Chief), Dave (Holt, Crew Member) and Dave Leiner (Cody’s crew chief at Venturini Motorsports for his ARCA competition) did a great job to fix it and get me back out there.  Scott Wimmer was awesome in getting me up into the top-five until our misfortune.  I really appreciate their hard work all year long.”

Coughlin also had the support of his family at today’s event.  His parents, John & Di, and his sister Kennedi were in attendance along with several of Cody’s fans who cheered him on throughout the race.

“I can’t thank my entire family enough for their support all year long,” Coughlin said.  “I have been very blessed with their love and understanding all year long.

“With Thanksgiving this week, I am also thankful for the blessings that God has bestowed on me and everyone that has helped me at all of our race events this season.  I hope everyone has a Happy Thanksgiving.”