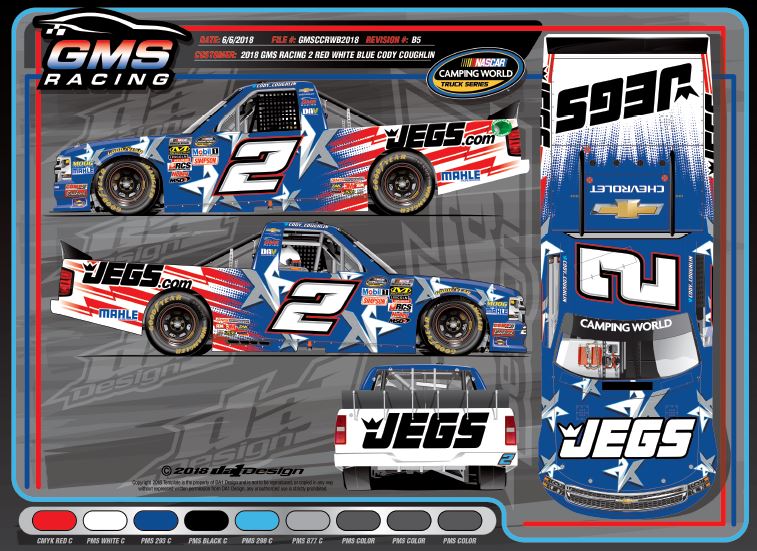 STATESVILLE, N.C. (June 26, 2018)—When it comes to the patriotism of sports fans, NASCAR fans have a passion for their country that is difficult to beat. Cody Coughlin, driver of the No. 2 JEGS Chevrolet Silverado for GMS Racing, echoes the sentiment with his true Americana and patriotism.

Fittingly, the NASCAR Camping World Truck Series (NCWTS) heads to a venue this weekend that’s unmistakably in ‘America's Heartland’ – the Chicagoland Speedway. Coughlin will sport a special scheme that will proudly show off the red, white, and blue for the NASCAR Salutes program.

As Coughlin heads to the Chicagoland Speedway this weekend, he hopes the JEGS red, white, and blue colors bring him some added luck for a great finish, as a great way to salute the men and women who have served this country.

Coughlin will also lean on the knowledge he’s gained on the track from his experience in the Automobile Racing Club of America (ARCA) Racing Series. The 22-year old has one top-five and one top-ten finish in two ARCA Racing Series starts at the Chicagoland Speedway with four laps led. In addition, Coughlin won the General Tire Pole Award with Venturini Motorsports in 2015.

“Last year in the NASCAR Camping World Truck Series, we finished in the 11th-place. Overall, I like Chicago and feel good about returning. I think our No. 2 JEGS Chevrolet Silverado will be competitive, and I think we have a really good shot at our first win there which is exciting.”

Since entering the NASCAR Camping World Truck Series in 2013, the Statesville, N.C.,-based GMS Racing team has logged 10 starts at the Chicagoland Speedway, resulting in a victory (2017), two top-five finishes and seven top-10 finishes, with an average starting position of 10.4 and an average finishing position of 10.1 with 42 laps led at the Joliet, Ill.,-facility.

Jerry Baxter, crew chief for the No. 2 JEGS Chevrolet Silverado, has two top-five and five top-10 finishes in the NASCAR Camping World Truck Series at the Chicagoland Speedway in six starts. In addition, he has one top-five and one top-ten finish in six NASCAR Xfinity Series (NXS) starts.

Kevin Hamlin, the Cody Coughlin Racing team manager, and former Monster Energy NASCAR Cup Series crew chief for Dale Earnhardt, has one win with Kevin Harvick (2001), one top-five finish and four top-10 finishes at the Chicagoland Speedway. Terry Cook, former NASCAR Camping World Truck Series driver and spotter for Coughlin, boasts one top-10 finish in one start at the Chicagoland Speedway. In addition, Cook has one start in the NASCAR Xfinity Series at the 1.5-mile tri-oval track.