Cody Coughlin Taking Next Step Up Racing Ladder in 2016 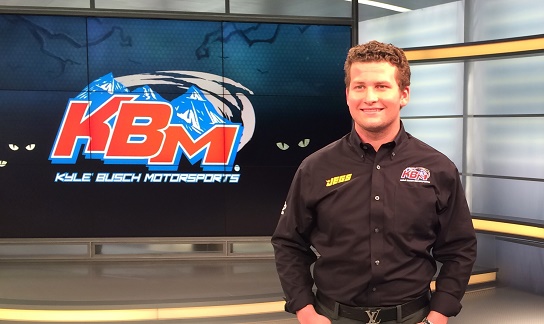 Joe Gibbs Racing development driver Cody Coughlin is taking the next step up the ladder to the highest levels of NASCAR.  The 19-year-old driver has been hired by Kyle Busch Motorsports to run partial schedule in the NASCAR Camping World Truck Series in 2016.

The partnership between KBM and Coughlin was announced on Thursday evening live on NASCAR Race Hub on Fox Sports 1.

Coughlin will share the seat with current KBM and fellow JGR development driver Daniel Suarez.  The number for the truck will be announced at a later date.

"I'm very excited for the opportunity to join the KBM family," expressed Coughlin.  "My parents, John and Di, raised me to really appreciate family values.  We do a good job with that at our family's company, JEGS, and I can already tell that KBM is the same way.

“I am eagerly looking forward to this opportunity to race in NASCAR and also work with Daniel.  He and I have had great conversations and I believe our driving styles will complement each other.”

"I've been able to watch Cody progress as a young driver in the Late Model ranks and be able to pick up some wins along the way, including a big one in the Super Late Model at Winchester (Speedway) last year,” said NASCAR Sprint Cup Series driver Kyle Busch.  “We look forward to Cody racing with KBM in the Camping World Truck Series as well as racing his Super Late Model next as well.”

Coughlin already has two Camping World Truck Series starts under his belt, one of which came with KBM at Michigan International Speedway in August.  He was on his way to top-10 finish until a late-race accident derailed a impressive run.

The Delaware, Ohio native has also made 17 starts in the ARCA Racing Series and has scored five top-five finishes and 11 top-10 finishes.  He also won two pole awards at Talladega Superspeedway and Chicagoland Speedway.  His best finish also came at Talladega this past spring when he finished second.

Coughlin has seen quite a bit of success in the Super Late Model ranks as well, a place where his now car-owner Kyle Busch has also seen a lot of success.  Coughlin has won races at prestigious tracks such as Indiana's Winchester Speedway and Florida's New Smyrna Speedway.  Most recently Coughlin finished second in the famed Winchester 400.

“I’m looking forward to as many as races as I can in the NASCAR Camping World Truck Series," said Coughlin.  "I get to go to the race track with no pressure, have fun and learn as much as possible.  This is going to be a great fit and we will mix in a bunch of Super Late Model races as well.

"I am just so thankful for Kyle and Samantha Busch for giving me this opportunity.  I also can't thank my parents and family enough for their love and support every step of the way.  And, of course, none of this would be possible if the good Lord hadn't blessed us in so many ways.”

The full schedule for Cody Coughlin’s slate of NASCAR Camping World Truck Series events will be announced soon.  Marketing opportunities with Cody Coughlin and the KBM team are available.