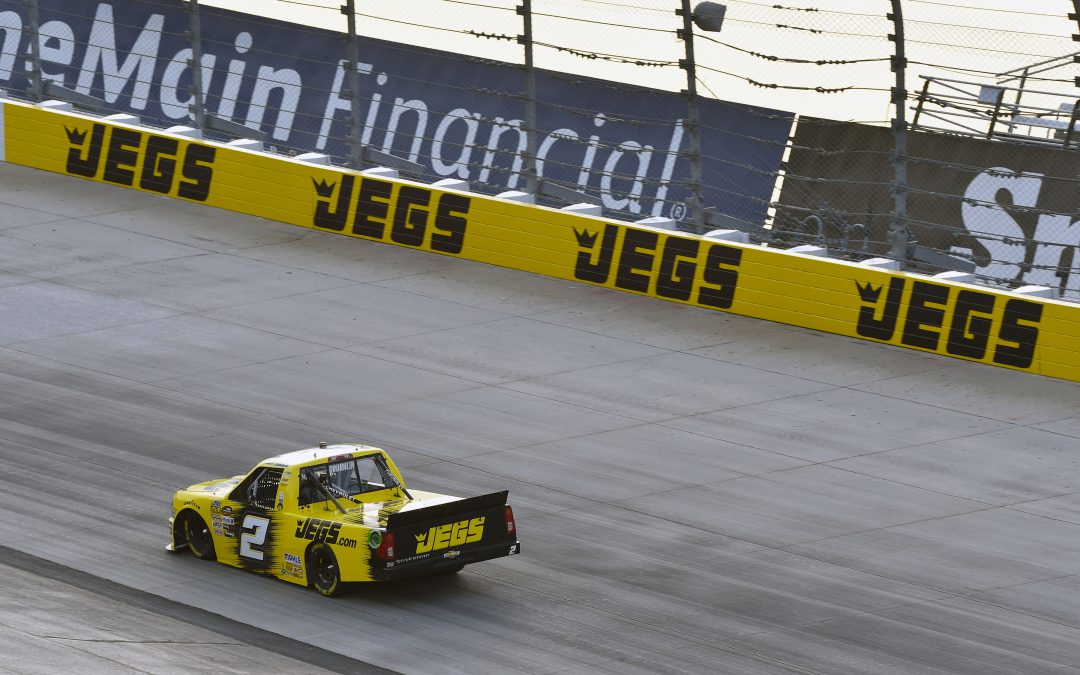 Coughlin posted his best finish since joining GMS Racing at the start of the 2018 NASCAR Camping World Truck Series (NCWTS) season, and the Friday’s result gave him a jolt of confidence.

“As a team, we are very pleased with the outcome of the JEGS 200,” Coughlin said. “We fought hard, and overcame adversity throughout the JEGS 200 to finish in the sixth-place. Our No. 2 JEGS Chevrolet Silverado team, led by crew chief Jerry Baxter, hung-in there, and together we finished strong.”

It was his best finish since placing eighth at the Las Vegas (Nev.) Motor Speedway on March 2.

Coughlin drove the JEGS Automotive, Inc.,-sponsored GMS Racing Chevrolet Silverado for JEGS’ first race entitlement sponsorship in NASCAR for the NASCAR Camping World Truck Series JEGS 200, and with his sister Kennedi Coughlin giving the command at the start the JEGS 200, he had the full-support of his family, friends, and the JEGS employees surrounding him.

“It was great having the JEGS employees and fans at the track to support,” Coughlin said. “I needed to give them a good result.”

Maybe it was that bit of good karma, and a lot of that personal drive Coughlin continuously displays that allowed him to recover from a pit road penalty on Lap 93 to methodically work his way forward into the top-10 by Lap 177.

The result at the Dover International Speedway Friday evening, his second top-10 of the 2018 NASCAR Camping World Truck Series season, made every clutch decision worth it for Coughlin and his GMS Racing team.

Coughlin set the 18th-fastest lap in qualifying for scheduled 200-lap race, turning a lap of 23.375 seconds at 154.011 mph on the high-banked concrete oval in the second qualifying round. Even with that result, Coughlin knew he would have a lot of work to show the true potential of the No. 2 JEGS Chevrolet Silverado and fight for another top 10 finish.

The green-flag waved for the JEGS 200, but the yellow flag raised quickly on Lap 1, and again shortly after, on Lap 15. Coughlin was almost picked-up in the incident on Lap 15, but maneuvered deftly and narrowly missed contact, moving to the bottom lane with the help of spotter Terry Cook’s navigation.

As the opening laps clicked off, Coughlin reported handling issues of his No. 2 JEGS Chevrolet Silverado. At the end of Stage 1 on Lap 45, Coughlin was scored in the 17th-place. The caution gave Baxter and Coughlin the opportunity to discuss various adjustments, and Baxter called the yellow and black machine to pit road on Lap 50 for routine service for four tires and fuel, but also with an air pressure and chassis adjustment to take on the next stage of the race.

Stage two began on Lap 54, with Coughlin able to gain some positions on pit road, scoring in the 15th-place for the restart. He showed good anticipation and a quick foot, and quickly advanced into the 13th-place with 30 laps remaining in the stage. At the end of Stage 2 on Lap 90, Coughlin was in the 12th-place, and under caution on Lap 93 Coughlin came to pit road for another round of chassis adjustments, four tires and fuel. Unfortunately, NASCAR issued Coughlin a pit road penalty on Lap 93 for a newly established rule – “outside half of the pit box tire violation/team member not in contact with the outside tires.”

Coughlin was relegated to the tail end of the field, but that couldn’t hold Coughlin back, and he quickly moved back into position. Even falling behind the lead lap on Lap 148 was a minor inconvenience; Coughlin thirsted for the front of the field, and after negotiating traffic all day, Baxter’s fine-tuned adjustments to the No. 2 JEGS Chevrolet Silverado gave him the set-up he needed to push hard, and getting through the tight traffic, Coughlin finally got close enough to the front to challenge for a win, and challenge he did.

For the final restart on Lap 188 of a scheduled 200, the Delaware, Ohio, native, restarted in the seventh-place. With six laps left, Coughlin grabbed an additional position from NASCAR Xfinity Series (NXS) champion Joe Nemechek, in a green-white-checker finish for a career-best sixth-place at the Dover International Speedway.

And best of all for Coughlin, the strong result marked a turning point for the early season.

“We have great momentum building as we go to the Kansas Speedway with our GMS Racing team,” Coughlin said. “I am looking forward to the weeks to come.”