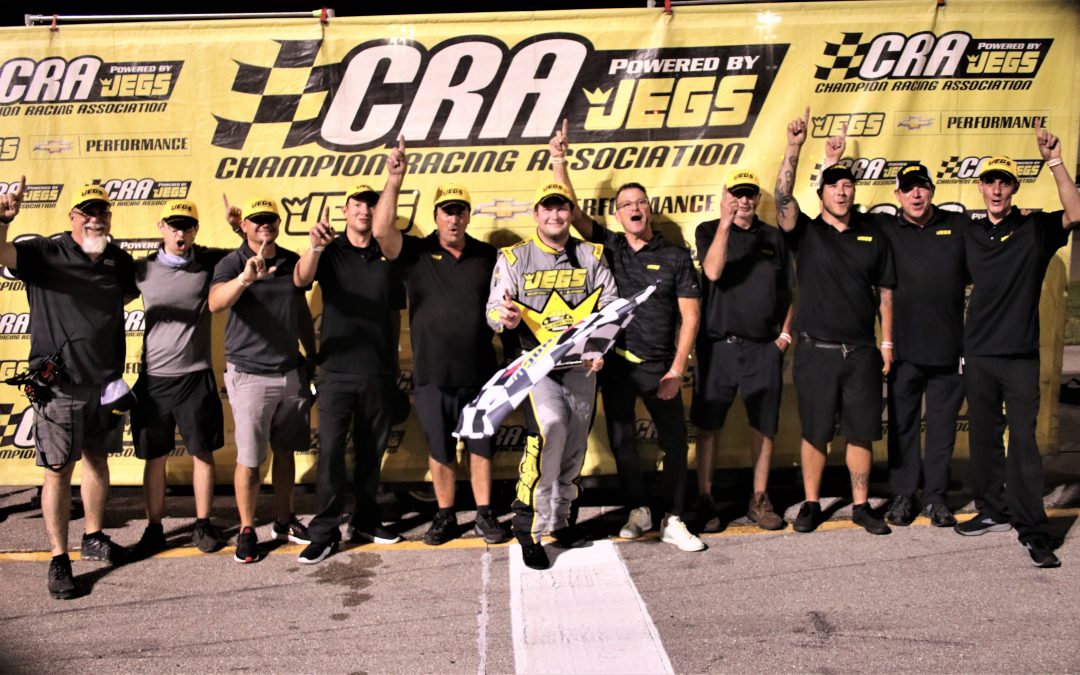 Salem, IN (November 10, 2020) – Cody Coughlin and his team entered the 2020 season not planning to run for a season Championship, just focusing on winning some races with the JEGS/CRA All-Stars Tour Presented by Chevrolet Performance. The COVID 19 Pandemic changed all that, like it did to many racers schedules in 2020, after starting the season with some great runs and a shortened 2020 schedule, Coughlin and his team decided to run for their third JEGS/CRA All-Stars Tour Championship.

Coughlin’s team had his new Fury racecar ready to go from the start of the JEGS/CRA All-Stars Tour season and it showed with a series high three wins in 2020 to go along with six top five finishes on his way to claiming his series leading third JEGS/CRA All-Stars Tour Championship. The team accomplished this while also competing for the ARCA/CRA Super Series Championship in 2020, where they got two wins and finished in fourth in that series Chase for the Championship.

For their hard work and never give up attitude, the Cody Coughlin Team has been named the JEGS/CRA All-Stars Tour 2020 Pitboxes.com Pit Crew of the Year Award winners. The team led by owner John Coughlin and new Crew Chief Willie Allen gave 100% each week and more, to keep Coughlin competitive at each series event and went way above to win the Pitboxes.com Pit Crew of the Race Award twice during the 2020 season, the most of any team in the series.

The team got its first Pitboxes.com Pit Crew of the Race Award at the Jennerstown Speedway event on July 4th, where the team prepared a great racecar for a track the team had never raced at before until that event. Coughlin would qualify in second behind 2020 Jennerstown Speedway Track Champion Albert Francis. Coughlin would take the lead on lap 22 from Stephen Nasse from his seventh place starting position and would hold off a hard charging Josh Brock to get the win.

“My whole team put in a lot of hard work this season and for them to get recognized with this award is awesome,” remarked Coughlin. “It really is a team effort, from my dad, my mom and my sister who have been supporting me my whole career. My Crew Chief Willie Allen, Kevin Hamlin, Terry Cook, Dave Holt, they have been around the longest and always give me 100%, along with some new team members this year like Ryan Cook, Taylor Cook, Hunter and Boots, I have to thank them all for a great 2020 season. I would also like to thank PitBoxes.com for supporting this great award.”

For earning the JEGS/CRA All-Stars Tour 2020 Pitboxes.com Pit Crew of the Year, the Cody Coughlin Team will receive a $1,000 Product Certificate from Pitboxes.com.

“We really appreciate Ricky Sanders at PitBoxes.com for coming up with this great award,” remarked Glenn Luckett, Managing Partner with CRA. “Ricky wanted to create an award that recognized the people behind the drivers in our series. The drivers get recognition at each race, but with the Pitboxes.com Pit Crew Awards for each series event and the season, a lot of the hard-working crew members for the JEGS/CRA All-Stars Tour teams get recognized also.”

Luckett added, “The Cody Coughlin Team worked hard to get their cars to the track and prepared for each race, all their hard work paid off with a third series Championship and a series leading three wins. We appreciate all their efforts this season!”

With the popularity of the internet, Pitboxes.com was launched in 1999 with a goal to specialize in fabricating a high quality line of standard and custom pit boxes. Since that time the boxes have gained such popularity that they have become standard equipment for almost any racer from Go Karters to Motorcycles to Upper levels of motorsports and everything in between. The products offered by Pitboxes.com has also changed quite a bit over the years having started with a stick built steel frame with a store bought toolbox to a much more modern process of CAD drawn, Laser Cut, Computer formed, all aluminum construction, with an in house built drawer system that is built to withstand not only the use by the race teams but also the many miles on the highway that a race team has to do going from race to race.

If you are a pro, amateur or even new to the racing profession we are very proud to offer you a world class pit box or pit cart! We manufacture a complete line of standard pit boxes, custom pit boxes, and pit carts to fit your particular needs and requirements. We are located in Stockbridge GA and our boxes are manufactured right here in the USA. Pit boxes have been shipped all over the world and we can custom create anything you have in mind for your own pit box. Give us a call and let us create your dream PITBOX! More Information on PitBoxes.com is available at www.pitboxes.com.

Additional information on all the CRA Series is available at www.cra-racing.com.