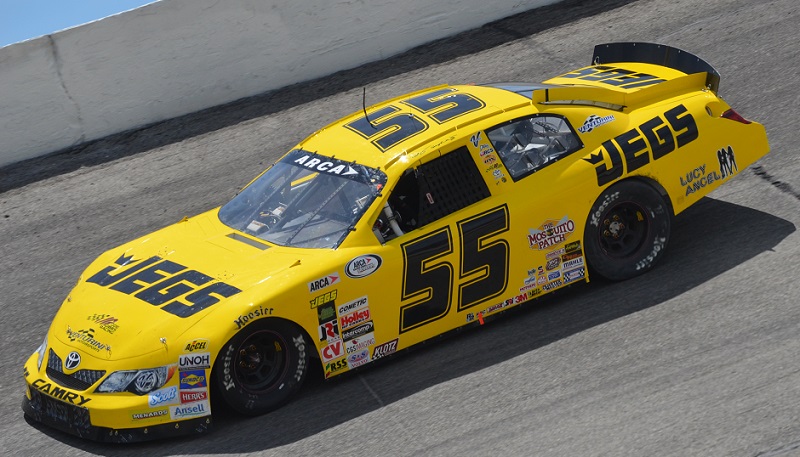 WINCHESTER, IN — Joe Gibbs Racing development driver Cody Coughlin will start from the 11th position in Sunday’s ARCA Racing Series Herr’s Chase the Taste 200 at Winchester Speedway (IN).  Coughlin, the driver of the No. 55 JEGS.com Toyota for Venturini Motorsports, recorded a fast lap of 16.20 seconds on his first lap on the half-mile high-banked oval.

“We’ve got some good cars behind us and I think we made a lot of good gains throughout the day during practice,” said the 18-year-old driver.  “I think we’re probably a top-five race-run car for tomorrow’s race.  We’re just going to work hard on keeping the fenders on and hopefully we’ll be in the top-five in the closing stages of the race.”

Earlier in the day, Coughlin battled loose conditions in the first practice before making tremendous gains on the car during the final practice session.  In qualifying, Coughlin said the car was just a bit too tight for him to get the ideal lap that he wanted.

“It was a little bit tight on throttle,” Coughlin said of his car during qualifying.  “I think we may have made an adjustment that tightened the car up a little bit and I might have driven it a little bit harder than what I did in practice.

“We’re going to make the most of it tomorrow.  We’ve seen our teammates qualify in the deep teens and finish top-five or top-three, so I know that we’re capable of doing that as well.”

After learning about Leiner’s credentials and working with him for the first time today, Coughlin is very excited about the experience Leiner brings to the No. 55 team.

“It’s going great,” said Coughlin about working with Leiner.  “He’s awesome.  He’s very easy to get along with.  He has a lot of experience.  I knew he was experienced, but I didn’t know the talent of who he previously had worked with.  There’s just a lot of depth and knowledge that he has that I hope to tap into.”

The green flag for Sunday’s ARCA Racing Series Herr’s Chase the Taste 200 is scheduled to wave at 2pm ET.  Fans in attendance at Winchester can meet Cody Coughlin during an on-track autograph session at 12pm ET.

Those unable to attend Sunday’s event can watch the race live on CBS Sports Network or tune into Speed51.com for live lap-by-lap updates.