Cody Coughlin Turns Adversity Into a Test & Tune at Anderson 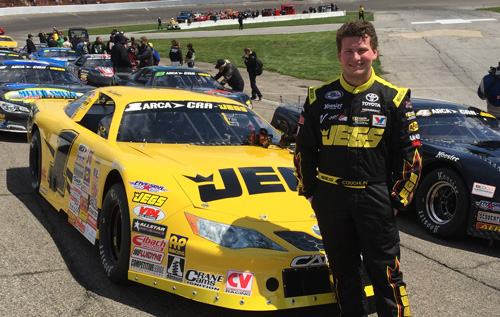 The Joe Gibbs Racing Development driver was running third when he had a right front tire go down on his number-one Super Late Model on lap 16.  The Team JEGS crew quickly changed the tire and Coughlin returned to the track several laps down.

Coughlin and his team continued to run and gather valuable data for them to use in future events.

“We were taking our time and settling down for the long race and the tire going down took the chance for the win away,” explained Coughlin.  “But, we went back out and it was a great opportunity for us to work on our setup for the next time we come here.”

On lap 77, Coughlin received some damage from a minor on-track incident and at that point the team had accumulated the notes it needed so they asked the Delaware, Ohio native to save the car for another day.

“My crew did an excellent job trying to get us back on the track after the tire went down,” exclaimed Coughlin.  “I really have to thank Kevin (Hamlin, Team Manager), Nick (Easton, Crew Chief), Scott (Wimmer, Spotter) and Dave (Holt, crew member) for their hard work all weekend.  It would have been fun to celebrate a victory with them, but we will get them next time.”

Along with his crew, Coughlin also had the support of his family, which included his parents, John & Di, and his sister Kennedi.

“It was great to have them at the track today, and I really appreciated their love and support after the race.

“I also want to thank God for a safe race and giving all of us a safe travel home this Sunday night.”

Coughlin will now transition from the smallest track he will race on this year to the biggest track this Friday, as he will return the ARCA Racing Series for the running of the International Motorsports Hall of Fame 200 at Talladega Superspeedway in Alabama.