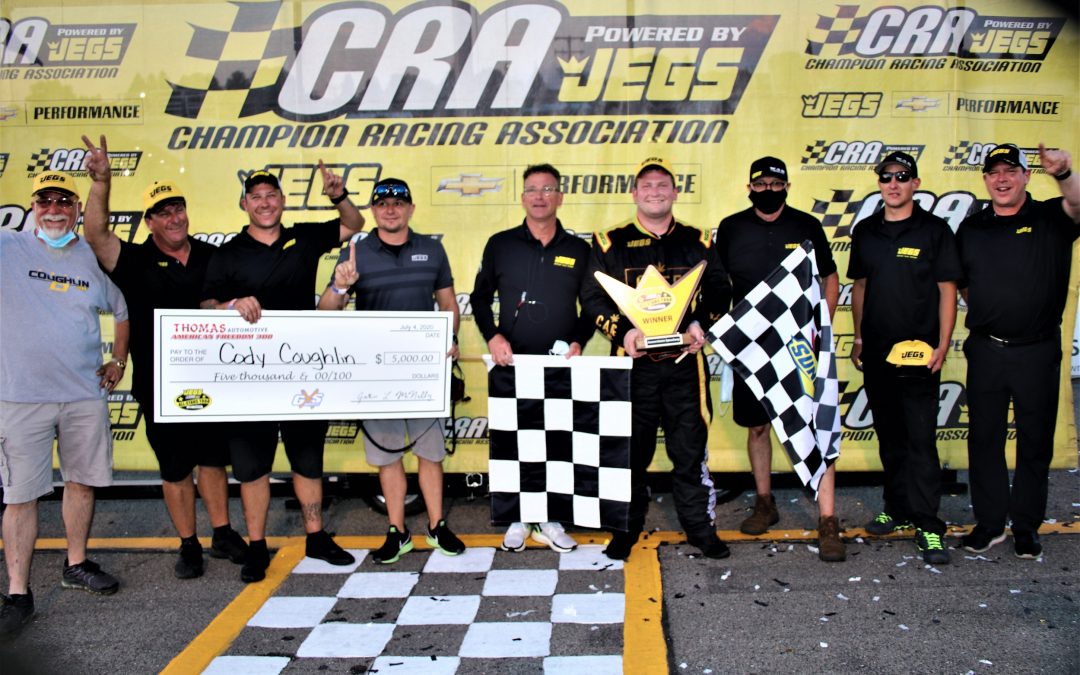 Salem, IN (July 5, 2020) – Two-time JEGS/CRA All-Stars Tour Presented by Chevrolet Performance Champion Cody Coughlin picked up the win in Saturday nights Thomas Automotive American Freedom 100 Presented by JEGS.com at the Jennerstown Speedway Complex located in Jennerstown, Pennsylvania. Coughlin passed Stephen Nasse on lap 22 and went on to lead the last 78 laps to get his first series win since his 2016 Championship season. The event was the first ever series event at the beautiful Jennerstown Speedway Complex and in the state of Pennsylvania.

“Even though there wasn’t a bunch of restarts, there was pressure on me all the way until the end,” Coughlin explained in victory lane. “Josh Brock was coming and was ready to pounce if I made any mistakes, so I had to try and run flawless laps all the way to the finish. We have really come a long way since I jumped back in the late models last year. We got behind on the technology a little while I was racing trucks, but we have made some huge gains this season, which shows with us back in victory lane! I have to thank my mom and dad for their support and my crew for all their hard work this weekend!”

Brock was coming off his first ever series win in the series last event at Anderson Speedway on June 13th and had another fast car Saturday night with his second-place finish after the event went the last 70 plus laps caution free.

“We had a good car tonight”, remarked 2018 ARCA/CRA Super Series Champion Brock. “ I was a little better in and he was a little better off, I was just hoping for a caution there towards the end, I think people would have seen a heck of a battle for the win between the top three cars here if a yellow had come out. Track position means a lot at these bigger tracks, and he had it. Got to thank my crew for all their hard work this weekend!”

Nasse took the lead at the drop of the green flag from his pole starting position after the events inverted start. Nasse fought off all challengers on a couple of early cautions but could not hold off Coughlin as the handling on his car started to go away. Nasse would eventually bring his car to pit road on lap 39.

North Carolina native Matt Craig finished third in his series debut on Saturday. Craig had some early contact with the 22S of Evan Shotko while making a pass and came to pit road for his crew to look at the car while running in the top five at the last caution. Craig would then charge through the field to finish in third after a late battle with Jimmy Tucker. Craig picked up the AR Bodies Cool Move of the Race for his run back to the front.

Tucker got a career best finish of fourth place after starting in tenth place. Tucker picked up the FLUIDYNE Cool Under Pressure Award after a tough battle with Craig for the third position.

Albert Francis was the Jerico Performance Parts Fast Qualifier Award winner but had to start the event behind the invert after missing his drawn qualifying spot when his car would not start. Francis, who won a Jennerstown Speedway Late Model event on June 20th retired from the event on lap 43 with fuel pressure issues.