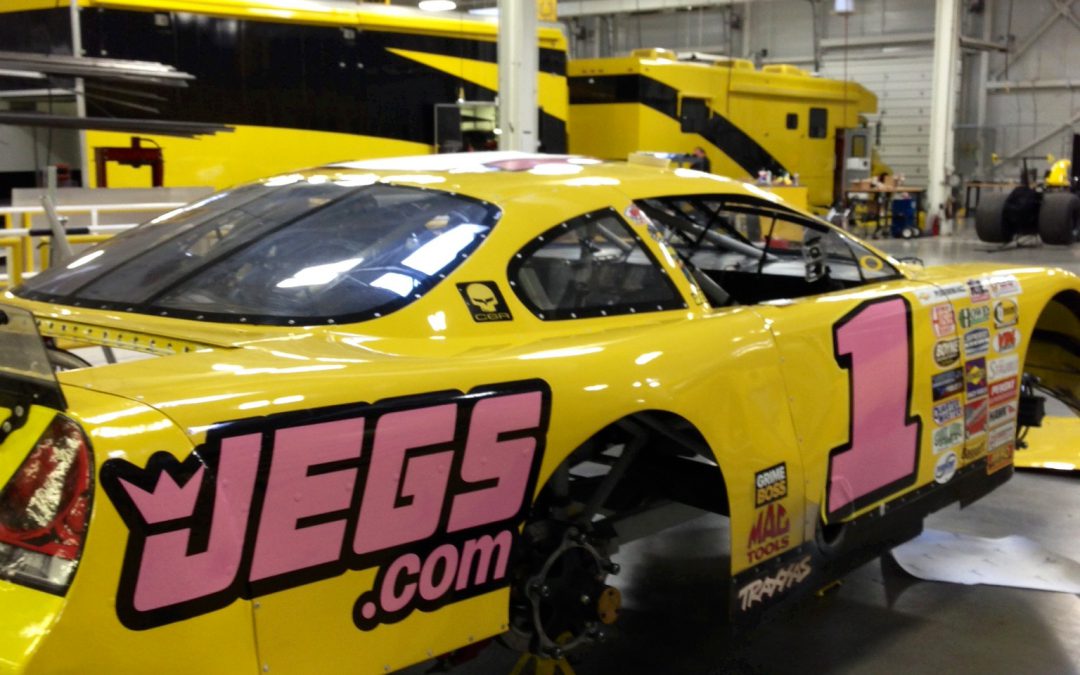 I love Winchester!  I remember the first time that I drove onto the frontstretch with a rental car; it was definitely not like anything I’ve ever seen before.  You hear about the Bristol’s and the Daytona’s with all the banking they have, but it’s nothing compared to Winchester Speedway.  It was breathtaking just to see it that first time, let along take a lap at speed.  It’s something I’ll never forget.

This weekend can’t come quick enough for me.  Winchester is my best track.  It’s a lot of fun to drive there to say the least.  We caught on to that place quickly and we’ve been fast in all the races.  We haven’t had the tire-saving techniques and everything you need to win there, but I’ve been able to adapt pretty quickly.

The weird thing is that it’s hard for me to give good feedback at Winchester.  Everything you do, at least for me, is so minor because we always unload pretty quick.  I just don’t want to do something too extreme at that joint because it’s just so fast.  Butch (VanDoorn, crew chief) is so good he can sense what I want without me actually telling him and that helps a ton.

When you go into those high-banked corners and you don’t use any brakes and get back to the gas as soon as you can, you definitely feel that you’re going really fast.  It’s like you pushed fast-forward on a video camera, you’re going that fast.  It’s insane!

But, at the same time, I try to relax as much as possible to focus properly.  I still feel like I can hammer-down in the corners, but going down the straightaways, that’s when you take a deep breath.  It’s just a short time, but that helps you think a little bit better about what you have to do the next corner.

What’s really special about this weekend’s Winchester 100 is that we’ve got a cool paint scheme on the car.  Our yellow car will have pink JEGS logos and numbers because October is Breast Cancer Awareness Month.  My dad (John) and mom (Di) kind of bounced it off me and I thought it was a cool idea.  The JEGS Foundation raises money for all types of cancer research.  In fact, JEGS has sponsored “Skate for Hope,” which is a fundraiser for Breast Cancer research, for the last six years.  All the proceeds go the James Hospital.  Kennedi (sister) has skated with Olympic hopeful, Rockne Bruebaker every year in the event.  The event is pretty cool because past, present and future Olympians all there for one purpose, to raise breast cancer research money.

On top of that, I think we are so close to getting a win.  It’s been disappointing because we’ve been so close lately, but we’ve also taken a big step in the right direction.  I have excellent people around me like Scott Wimmer (spotter), Kevin Hamlin (Team Manager), Butch and Bubba Pollard (Driver Coach); they’re all steering me in the right direction.  Because of that, I think we’re going to have a really good car this week.  I think we can apply the lessons we’ve learned everywhere, especially from IRP (where Cody led more than half the race).

And my family has been so great.  We’ve been spending a lot of time together the past couple weeks without honestly doing a whole bunch.  We’re at the point of the year where the leaves are changing here in Ohio, so that’s a bunch of fun and we got the pumpkins from the patch this past weekend.  God has definitely blessed all of us in so many ways.  Of course I still have my schoolwork everyday as well.  I’m certainly not a straight-A student, but I’m definitely passing, so that’s always good so we can go racing.

And like I said I can’t wait for Winchester.  Going there Monday to test was so cool.  You should have seen all the campers and stuff that were already there.  That says a lot about how big this race is going to be.  I know Kyle Busch is going to be there and everything, but it’s not about him.  This race is not televised and it’s not the Daytona 500, but these are real race fans.   They are there for real short track racing and they’re probably some of the best fans on the planet at that place.  It’s a shame we didn’t get our Super (Late Model) finished, ready and tested for the 400; I definitely wanted to run it this year, but it didn’t all work out.  But we’re going to make the best of it at the 100 and with God on our side I think we’re primed for a great finish.