Cody’s Corner: Learning From the Best 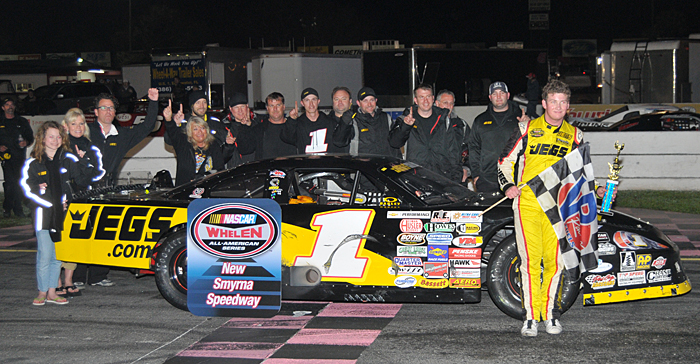 They say in racing that the best way to learn is to watch the professionals.  That certainly applies to watching the NASCAR guys wheel their racecars every Sunday, but it also means watching how they are in the media and with fans.  These days, that’s almost just as important as on-track success.  Since it’s been a couple weeks since I last was in a racecar, I decided to take some time and really watch and learn from the best of the best when it comes to handling yourself professionally outside the racecar.

I admire Jeff Gordon, Jimmie Johnson and Tony Stewart in their own certain ways.  I really like the way Jeff handles himself on TV and on the track most of the time.  Jimmie is a really cool guy whether the camera is on or off.  Stewart is a great guy and a fierce competitor, which I admire.  I would like to take all the qualities of those guys for myself and make a “super driver.”  All of them have special things about them, but Gordon is the one I look up to most.

I was in the drivers meeting at the 2008 Daytona 500. I was with my dad (John) and some others with JEGS, headed towards the door and Jeff just happened to be standing there.  We introduced ourselves, and he recognized our name because of what we do in motorsports.  We didn’t get to have a long conversation being that is was Daytona 500 day and all.  It was the 50th anniversary as well, so there was lots of attention and media around.  Since then, we have different chances to talk.  I have had chances to talk to Tony and Jimmie more, but that day was the day I knew that I wanted to be like Jeff.

I watch Jeff’s interviews, especially the one at Phoenix with the Bowyer deal last year.  That was probably the most uptight he had ever been and he still conducted a very professional interview.  He is really gracious in winning interviews as well.  He thanks his sponsors, but also tells a mini-story.  I really like and admire that.  He is really the guy that took the sport from a down South homeboy deal to the corporate world because he was different.  He really bridged together that gap.

I think Jimmie has picked up what Jeff started and has continued it on.   Jimmie has given me good advice on how to stay focused.  We text every once in a while.  I don’t want to bug him, but if there is ever a time I really want to learn something about the mental or driving part of racing, he has always texted me back.  He is a just a really nice and fun guy.

I’ve been blessed to work with some really good people over my few years in racing, plus I have the support of my dad, mom (Di), sister (Kennedi) and more.  I’ve also been extremely lucky to make some friends along the way that I can really lean on for advice.  I know that you can never stop learning in this sport.  I never leave a track, a meeting or an interview without learning something that I can do or say better the next time.  I think that’s the only way to get better is by learning from the best.  Hopefully, with some more learning and experience, I can achieve the kinds of things that guys like Jeff, Jimmie and Tony have over the years.