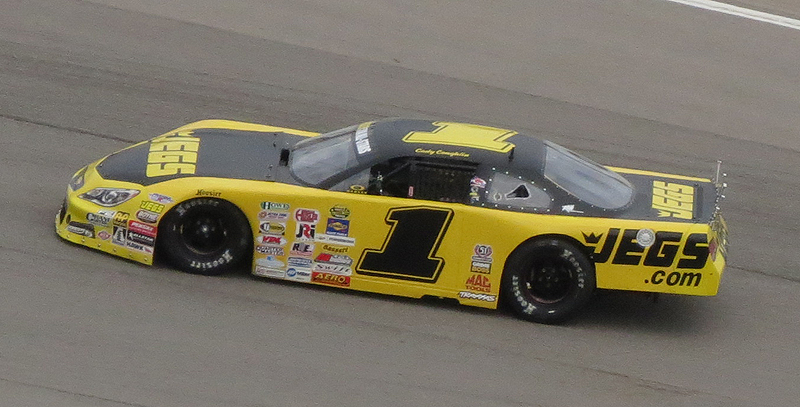 With over 500 family, friends and many associates from JEGS in the stands, Cody Coughlin had a goal for a strong performance this past Saturday night at Columbus Motor Speedway in his home state of Ohio for the second JEGS/CRA All-Stars Tour race of the 2013 season.

It was a homecoming that many remember back from their high school days where fans would cheer loud and proud for the home team.  In this case, it was Cody’s sister Kennedi leading the “Cody! Cody!” cheer as he was introduced prior to the start of the CoughlinCars.com 100.

“It was really cool to have many family, friends and associates from JEGS at Columbus Motor Speedway,” Coughlin said. “There was a lot of energy that I was able to feed off of and the whole day was a lot of fun.  I am really blessed and thankful for all of the support and appreciate everyone for coming out and supporting us on Saturday night.”

Even though the ultimate goal for the night would have been a win, he was satisfied with a fifth place finish in front of a hometown crowd.

Most of all he is looking at the bigger picture, the 2013 JEGS/CRA All-Stars Tour Championship.  After Columbus, he is currently six points behind current leader Chad Finley the points battle.

“It was a solid run for us to keep up our strong start to the JEGS Tour season,” said Coughlin.  “We had a good practice and qualified third and started on the pole after the invert.  We hoped to keep our JEGS.com car up front from the start, but the track cooled down a lot, which made the car real tight.  But our team dug deep and came home with a fifth-place finish. We will try to catch a top-five whenever we can knowing that on days when we can’t win, strong top-five runs will be the key to a championship run this year.

“The track made the car tight in the center, which led to not much drive off the corners, but all my guys did a great job of giving me the best car they could for the conditions,” Coughlin said.  “It was kind of out of control, but we were able to work around it and come home with a top-five finish. It was a tough day, but the team didn’t give up and looking at the big picture a top-five result is always good. I really have to thank God for the talents he has given to everyone on this team to make us successful.”

Having the support of scores of fans and family in the grandstands at Columbus, a track just a few miles from his home and race shop, helped will Coughlin to the solid finish as well.

The fifth-place finish was his second top-six result in two points events so far on the JEGS/CRA All-Stars Tour, which now have Coughlin sitting second in points.  Coughlin and his Team JEGS racing team will now get ready for next JEGS/CRA All-Stars Tour event on Friday, June 7 at Dixie Motor Speedway in Birch Run, Michigan, a place Coughlin has run well at in the past.

“I really like Dixie and look forward to going back there,” Coughlin said. “It would be great to come out of there with a strong top-five finish, even make it on the podium.  We will be going there next week to test and get ready.  Our team is working hard and we will keep digging.”

The Dixie 100 Presented by JEGS.com will go green at 8pm ET on Friday, June 7 at Dixie Motor Speedway.