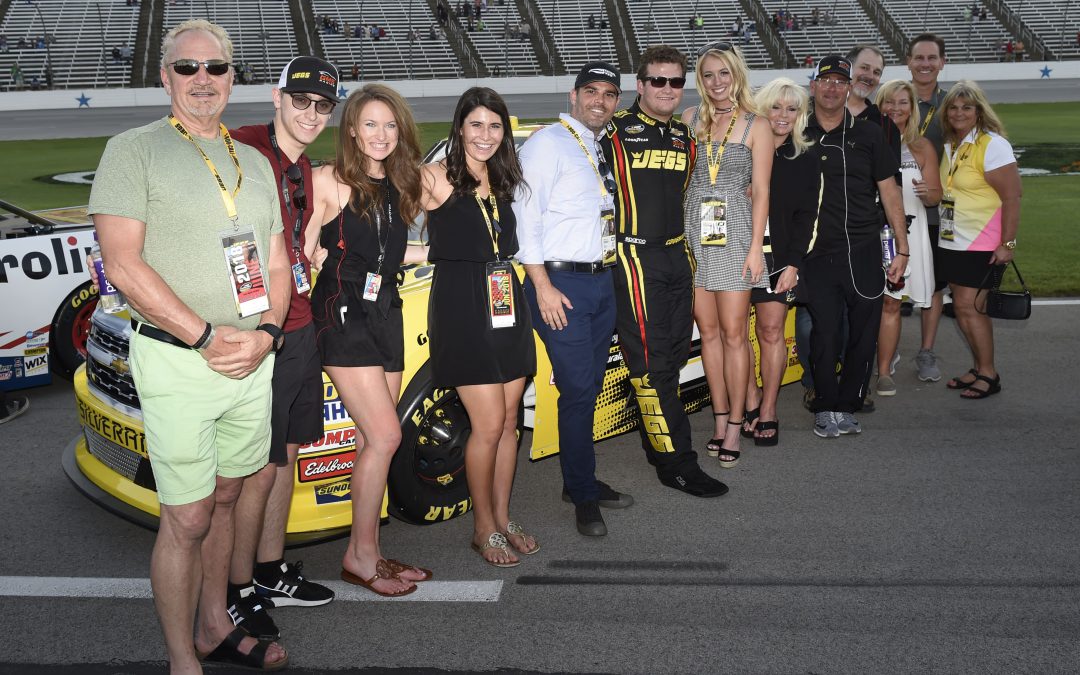 STATESVILLE, N.C. (June 9, 2018)—Cody Coughlin was a premiere example of the comeback kid at the Texas Motor Speedway, finishing in the eighth-place in the NASCAR Camping World Truck Series (NCWTS) PPG 400 on Friday, June 8.

He put on quite a recovery performance under the lights at the Fort Worth, Texas,-facility.

Coughlin climbed as high as fifth-place in the 32-truck field, and even when faced with early adversity, he was able to recover from the 21st-place, two lap downs, in order to score his career-best finish at the Texas Motor Speedway.

Coughlin spent 30 laps of the 167-lap event running two laps down, and 24 additional laps one lap down to the leaders after an unexpected return to pit road for a loose right-rear tire on Lap 51 while in the 14th-place. Coughlin eventually worked his way back through the field to the front, with strategic help from GMS Racing crew chief Jerry Baxter.

The Delaware, Ohio, native kept pushing in his No. 2 Flying Eyes® / JEGS Chevrolet Silverado throughout the race, and with that perseverant effort, recorded his seventh career top-10 finish in the NASCAR Camping World Truck Series, and fourth top-10 finish of the season.

“It was definitely great to get another top-10 finish tonight,” Coughlin said. “Our No. 2 Flying Eyes® / JEGS Chevrolet Silverado team worked together to rally against some difficulties early-on, and we were able to finish strong. We will get that ‘W’ soon. I cannot thank Jerry (Baxter), the JEGS team and GMS Racing enough for their hard work, and dedication.”

“In addition, it was great to have my family, girlfriend, as well as Don Osmond Jr., VP Marketing for Flying Eyes Optics, and special guests of Flying Eyes® in attendance as well.”

The 22-year old started the NASCAR Camping World Truck Series PPG 400 in the 14th-place, and reported tight handling issues to Baxter by Lap 7. Coughlin quickly maneuvered into the top-10 after the second caution flag waved on Lap 13 for an incident in Turn 3. At the halfway marker of Stage 1, Coughlin reported that his Flying Eyes® / JEGS Chevrolet Silverado was getting tighter in the corners as the green-flag run progressed. A caution on Lap 29 created a varying pit strategy as Baxter elected to not come to pit road, which placed Coughlin in the sixth place for the restart. At the end of Stage 1, on Lap 40, Coughlin finished in the fifth-place and earned NASCAR Camping World Truck Series stage points. Under caution for the stage break on Lap 43, Coughlin brought the black and yellow machine to pit road for four tires with an air pressure adjustment, fuel and chassis adjustments, and Coughlin restarted in the 14th place for the start of Stage 2.

After the start of Stage 2, Coughlin reported a vibration to his GMS Racing crew. Taking a lap to evaluate, Coughlin came to pit road under green-flag conditions on Lap 51 for four tires and fuel. He returned to the track in the 21st place, two laps down. Baxter and the No. 2 GMS Racing team quickly created a game plan to get Coughlin back on the lead lap. Finishing Stage 2 in the 18th place, Coughlin recovered one of his two lost laps with the “wave around.” Still fighting tight handling conditions, Coughlin returned to pit road on Lap 84 for four tires, fuel and major chassis adjustments, and he restarted in the 18th-place for the Final Stage.

Coughlin benefited from a caution on Lap 108 and was able to get his final lap back. Coming to pit road on Lap 113 for four tires, fuel and another round of adjustments, Coughlin rejoined the field but immediately returned to pit road to top-off with fuel. On the lead lap, Coughlin restarted in the 16th-place, and quickly returned to the top-10 with 50 laps to go. Coughlin remained in the 10th-place as he conserved fuel, still tight handling conditions as the laps wound down. A caution on Lap 151 allowed Baxter to make final adjustments to the No. 2 Flying Eyes® / JEGS Chevrolet Silverado, and Coughlin restarted in the 11th-place. Using the fresh tires to his advantage, Coughlin was able to work his way up to the eighth place.

The next event on the NASCAR Camping World Truck Series schedule is the M&M’s 200 presented by Casey’s General Store on Saturday, June 16, at the Iowa Speedway. The FS1 and Motor Racing Network (MRN) will broadcast the race starting at 7:00 p.m. (ET).