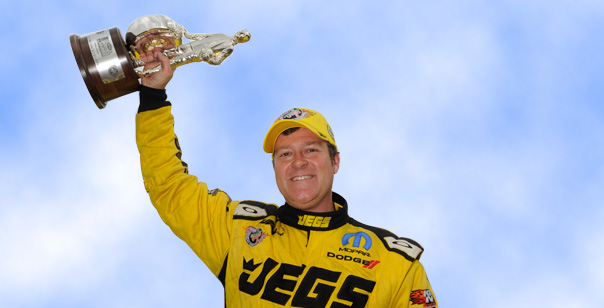 There's plenty of reason for Coughlin to be optimistic. He's won at the venerable quarter-mile in north central New Jersey four times in the past and his JEGS.com/Mopar Dodge Avenger is arguably the most consistent racecar in the Pro Stock class at the moment. In eight national events this year, Coughlin has raced to three final rounds and has an overall race-day record of 17-7, the best in the category.

"We're excited," he admitted. "Coming off our best effort of the year, where we not only got the trophy but passed the 500 round-win mark at the same time, has us all feeling pretty good.

"We didn't see a need to change anything with the car so the guys just double-checked all the welds, looked over the wiring and inspected the plumbing and loaded it up for Englishtown. I can't wait to get there."

Old Bridge holds a special place in Coughlin's heart, for both the memories he has from his youth and the incredible support of the knowledgeable northeast spectators.

"This is one of the most historic places we visit," he said. "I remember as a boy getting our copy of National Dragster in the mail and seeing Jeb Allen's 'Praying Mantis' Top Fuel dragster on the cover after he won E-town. I poured over all the photos and thought the track seemed so exotic and far away. I promised myself I'd race there one day and in early '90s I got the chance in my Super Gas car.

"We finally got a win there in 1997 in Super Gas and then we came back the next year and won Pro Stock. What's wild is there are still plenty of fans that come up and talk about those days and they remember every detail. That's one of the best things about E-town; the fans are incredible. The stands are always full and they line up on the fence three and four deep. They understand our sport so well and that drives us to work that much harder."

Coughlin enters the weekend 74 points behind championship leader Mike Edwards, who has won twice in 2013. Teammate Allen Johnson, whom Coughlin beat in the final of the last race, is third. Edwards and Johnson are both 15-6 in elimination action.

Pro Stock qualifying sessions are slated for 4 and 6:15 p.m., Friday, and 12 and 2:15, Saturday. Eliminations begin at noon Sunday. All action will be broadcast on ESPN2.