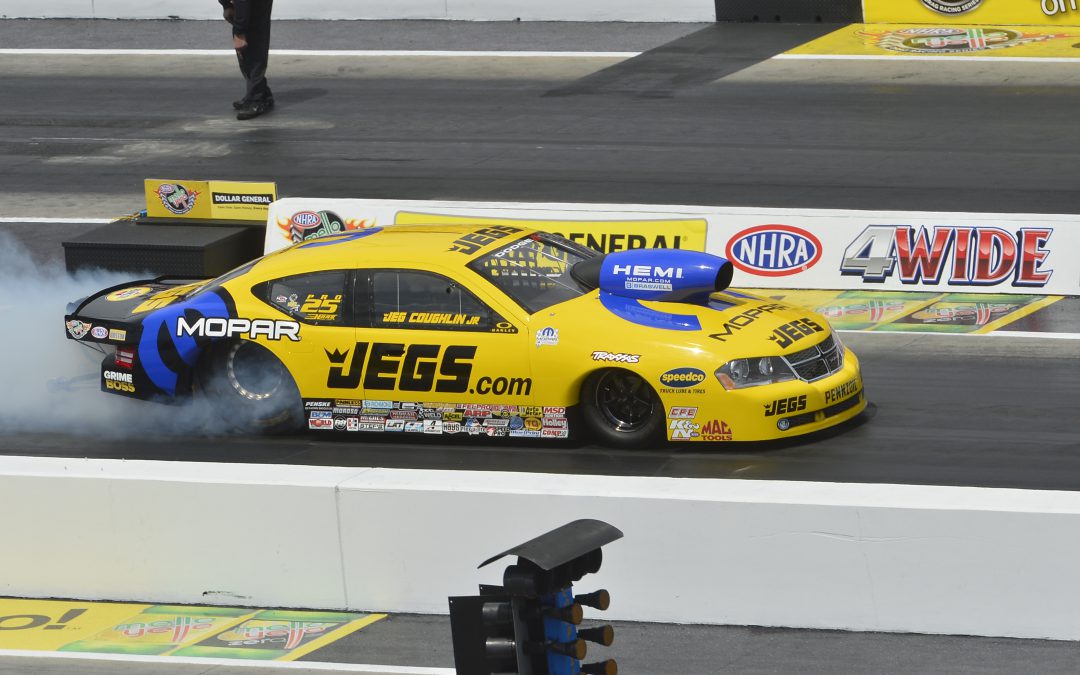 HOUSTON (April 24) — Jeg Coughlin Jr. has visited the winner's circle at Royal Purple Raceway in Baytown, Texas, on four separate occasions in the past, but his history in the Lone Star State has little to do with his confidence heading into this weekend's race at the venerable speedplant.

"No one on this team needs motivation," Coughlin said. "We are all very focused on winning rounds, winning races and putting ourselves in the best position possible to challenge for the 2013 Mello Yello championship with both cars.

"We're in a great place right now and the confidence we have in our abilities is there. We just never stop fine-tuning. Racing is a work in progress. It's a daily challenge, and that's what drives us to the championship level."

Coughlin has five world titles and 68 national event victories to his credit. His teammate, Allen Johnson, is the reigning Pro Stock champion. Their two-car, Mopar-backed assault on the factory hot rod class has both men in solid contention after five races, with Johnson in second place and Coughlin 41 points back in fourth.

"Allen and his father Roy, along with (crew chiefs) Mark Ingersoll and Jim Yates, have a tremendous plan in place and we've had a very positive start to the season," Coughlin said. "Allen's won twice and I've had two runner-up results. There are still areas where we could have done better and we're working to correct the little things that are potentially holding us back.

"I had to return to Ohio but the team stayed in Charlotte Monday and tested both cars. Allen graciously jumped in the JEGS.com/Mopar Dodge Avenger and made some hits for me. We're still working on consistency and reliability and the fact they wanted to stay and test is huge. As I said, the work never stops."

Although he had to return home Sunday evening, Coughlin did hang around long enough to watch his brother Troy Coughlin win the Pro Mod title in Charlotte. It was Troy's third win in his last four starts, dating back to the end of last season. Now he's hoping to join his brother in the winner's circle at Houston.

"It motivates you to see another championship team at work," Jeg said. "We have a championship-winning team here and Troy's group is also riding high after winning the Pro Mod crown. You can learn a lot by watching the way they conduct themselves.

"It's always fun to race with your family members around and Troy and I have talked about winning the same race and sharing the winner's circle some day. It would be huge to get it done in Houston. I know we both have the capabilities to get it done."